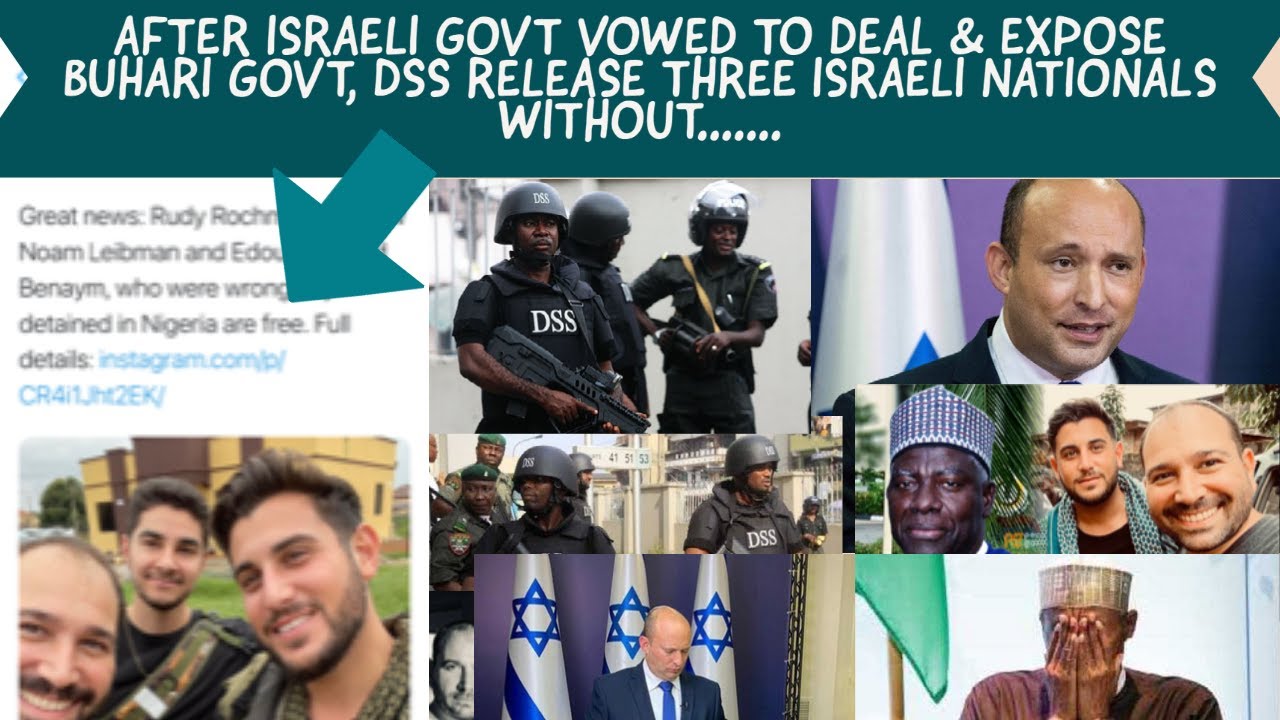 The Department of State Services has released three Israeli filmmakers who were arrested about three weeks ago over an alleged partnership with the Indigenous People of Biafra.

The filmmakers namely; Rudy Rochman, Andrew (Noam) Leibman and Edouard David Benaym were released by the Nigerian secret police and flown back to Israel on Wednesday evening.

In a statement released, the Jewish filmmaking group lamented that the three Israelis had no access to bathing or clean clothes all through the 20 days they were in custody.

The group noted that the purpose of their visit to Nigeria was not political as alleged.

The statement reads, “The We Were Never Lost Team: Rudy Rochman, Andrew Noam Leibman & Edouard David Benaym have officially been released from the Nigerian Government’s DSS (Secret Service) illegal detainment and are on a flight back to Israel as of the evening of July 28, scheduled to land in Israel July 29th at 9:00AM (Israel time).

“The WWNL documentary team were wrongfully taken on Friday July 9, 2021 at 7:30 AM (Nigerian time) to the local DSS facility in Anambra State, Nigeria where they were held for 24 hours before being transported to the DSS headquarters in Abuja, nine hours away with dangerous transport.

“We Were Never Lost is a documentary project that aims to tell the stories of disconnected and lesser-known Jewish communities around the world. The first Season of WWNL is set to take place in Africa traveling through Nigeria, Uganda, Tanzania, Madagascar, Zimbabwe, and Ethiopia.

The goal of the project is to showcase the fascinating stories, experiences, struggles and aspirations of such communities, to reveal the diversity of Jewish life, and to unite the Jewish People around the world.”

“Nigeria was scheduled to be the first episode filmed of the African season covering the Igbo communities genuinely practicing and preserving their Judaism.

“Unfortunately, after only 2 days of filming, Nigerian bloggers started hijacking images from the WWNL social media pages and fabricated an association between the Israeli crew to separatist movements in Southern Nigeria likely in order to gain more publicity.

“The Igbo People are not a monolith. One separatist movement does not represent S50 million people. Furthermore, the communities that were to be visited had nothing to do with the separatist movement and the point of the film was purely cultural, spiritual, historical, and not political.

“From the moment they were taken their phones and passports were stripped from them and they were at no point of their detainment able to contact anyone.

“Rudy, Noam, and David were caged and held for 20 days in horrendous conditions, locked into a small cell, sleeping on the floor with no access to showers or clean clothes.

“They were interrogated and mistreated without ever officially being arrested or accused of anything. There were countless human and international violations that occurred, which can and will be discussed in depth at a later time.

“Fortunately, the Jewish organization, Chabad of Nigeria, was able to reach the three Israeli filmmakers after their 5th day in captivity and provided them with proper Kosher meals daily.

“Thanks to the efforts of the Israeli, US and French embassies, along with other diplomatic channels, families, and many caring individuals who helped in the process, as of July 28″ the WWNL team has been officially cleared of any and all suspicions and although their visas are still valid have been instructed by the Nigerian government to leave the country immediately.”