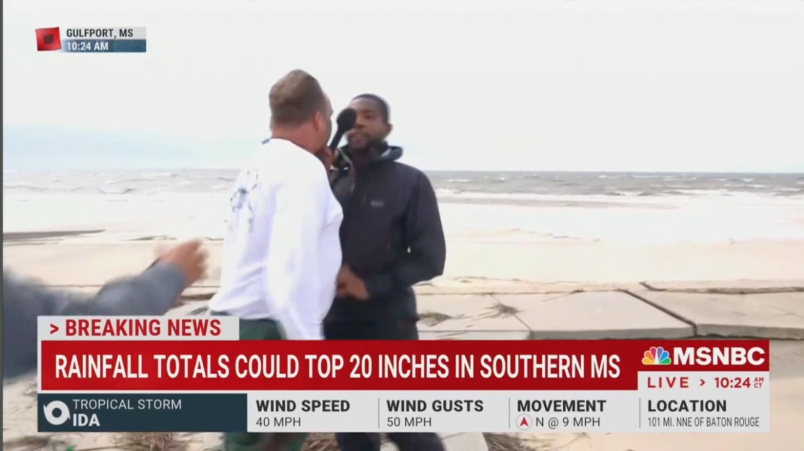 As Hurricane Ida approached Mississippi on Monday morning, MSNBC correspondent Shaquille Brewster unexpectedly found himself embroiled in another storm — a white man who angrily confronted Brewster, a Black man, during his live report on the hurricane.

As Brewster began his live shot in Gulfport by reporting that mail delivery had returned and that rain had stopped in the area, a white truck drove into the frame and pulled over to park behind Brewster.

The driver of the truck, a white man, jumped out and charged towards Brewster while yelling inaudible remarks. Brewster then directed the camera crew towards the Gulf of Mexico after quickly noticing that there is a “random person going around.”

“I’m going to turn this way because we deal with people every once in awhile,” Brewster said.

Brewster appeared to keep his composure and continued reporting on the hurricane and the city’s curfew staying in effect until the man’s voice grew louder in the background — still inaudible. The man then aggressively got in Brewster’s face.

“(MSNBC anchor Craig Melvin) I’m going to toss it back to you because we have a person who is…” Brewster is heard saying as the white man confronted him. Brewster appeared to raise his own arm to defend himself and started to lose his grip on his microphone while the white man continued getting in Brewster’s face.

Brewster’s live shot abruptly ended at that point, prompting Melvin to react in real-time: “Hey, hey, hey. We’re going to check in with Shaq Brewster to make sure all is well. A lot of crazy out there.”

Melvin later reported that Brewster is “just fine” and “okay.”

Brewster confirmed that he and his team are “all good” in a tweet following the confrontation.

It is unclear what the white man, whose identity has not been confirmed, was yelling about when he confronted Brewster.

Watch the confrontation below:

Back to Top
Close
X
Pentagon investigating possible civilian deaths in Kabul drone strike…United StatesIndependentPentagon officials offered few details about a US drone strike in Kabul carried out over the weekend, while not disputing reports that the …

X
Commander of US Central Command: “We did not get everybody out that we wanted to…United StatesJust like that, we are out of Afghanistan. The last plane has taken off and we are out. And just like we expected, we left people behind. Here’s the C…