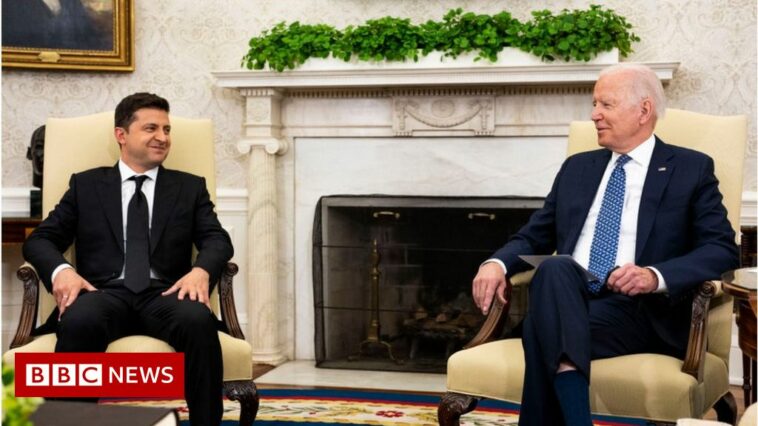 A year can be a lifetime in politics. The past two probably qualify as a generation’s worth of lifetimes, so a reader might be forgiven for not quite remembering why the name of Ukraine’s president Volodymyr Zelensky rings a bell.

Mr Zelensky was asked two years ago by Donald Trump to do the then-US president “a favour” – to announce that his government was investigating Joe Biden, who had just launched his bid for the White House. In exchange, Mr Zelensky would get a trip to Washington and military aid.

Mr Trump did not get his hoped-for announcement (his request instead triggered his impeachment) and Mr Zelensky did not get his Washington visit until today – with now-President Biden – posing in the Oval Office for photos with the man whose campaign he was asked to sink.

If the situation was awkward, neither man let on.

The public portion of the meeting came across as carefully scripted – in part because of the need for translators – and it reflected the tightly controlled nature of the Biden presidency. The free-wheeling days of President Trump as the American head of state are decidedly over.

Mr Biden noted the 30-year anniversary of Ukraine’s independence from the Soviet Union, adding that the US “remains firmly committed to Ukraine’s sovereignty and territorial integrity in the face of Russian aggression.” He also reiterated that the US plans to send Ukraine $60m in aid, on top of the $400bn it delivered last year.

The Ukrainian president, for his part, expressed gratitude that Mr Biden agreed to see him during “difficult times for the world and for the United States”. In fact, the meeting had been originally scheduled for Monday but was pushed back twice to allow Mr Biden to focus on the final hours of the US withdrawal from Afghanistan.

Back to Top
Close
X
Afghanistan crisis: Unclear if ruthless Taliban will change, says US general…In the NewsBBCThe top US general has described the Taliban as a "ruthless group" and says it is unclear whether they will change.Gen Mark Milley said, however, i…

X
Abba Kyari asked me to pay the proceed of hotel owned by kidnap Kingpin into my …In the NewsSahara ReportersAlawyer attached to the Inspector General of Police Intelligence Response Team (IGP-IRT), Nosa Uhumwangho, has explained how the embat…