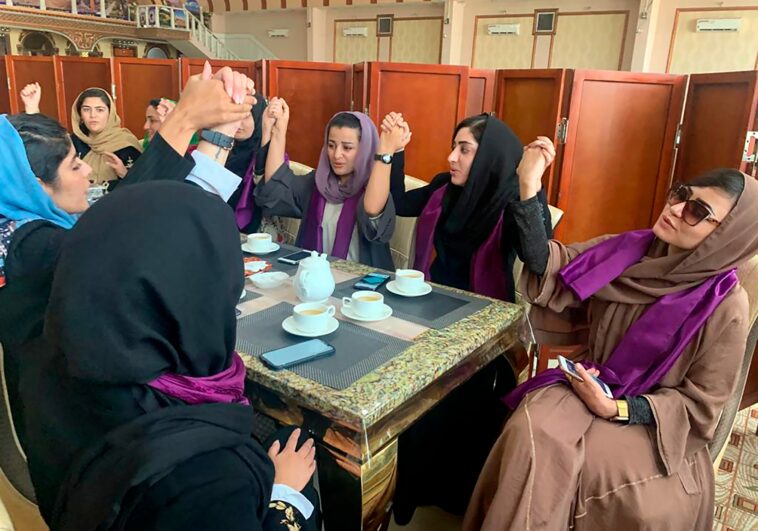 KABUL, Afghanistan – Taliban special forces in camouflage fired their weapons into the air Saturday, bringing an abrupt and frightening end to the latest protest march in the capital by Afghan women demanding equal rights from the new rulers.

Also on Saturday, the chief of Pakistan’s powerful intelligence agency, which has an outsized influence on the Taliban, made a surprise visit to Kabul.

Taliban fighters quickly captured most of Afghanistan last month and celebrated the departure of the last U.S. forces after 20 years of war. The insurgent group must now govern a war-ravaged country that is heavily reliant on international aid.

The women’s march – the second in as many days in Kabul – began peacefully. Demonstrators laid a wreath outside Afghanistan’s Defense Ministry to honor Afghan soldiers who died fighting the Taliban before marching on to the presidential palace.

“We are here to gain human rights in Afghanistan,” said 20-year-old protester Maryam Naiby. “I love my country. I will always be here.”

As the protesters’ shouts grew louder, several Taliban officials waded into the crowd to ask what they wanted to say.

Flanked by fellow demonstrators, Sudaba Kabiri, a 24-year-old university student, told her Taliban interlocutor that Islam’s Prophet gave women rights and they wanted theirs. The Taliban official promised women would be given their rights but the women, all in their early 20s, were skeptical.

As the demonstrators reached the presidential palace, a dozen Taliban special forces ran into the crowd, firing in the air and sending demonstrators fleeing. Kabiri, who spoke to The Associated Press, said they also fired tear gas.

The Taliban have promised an inclusive government and a more moderate form of Islamic rule than when they last ruled the country from 1996 to 2001. But many Afghans, especially women, are deeply skeptical and fear a roll back of rights gained over the last two decades.

For much of the past two weeks, Taliban officials have been holding meetings among themselves, amid reports of differences among them emerging. Early on Saturday, neighboring Pakistan’s powerful intelligence chief Gen. Faiez Hameed made a surprise visit to Kabul. It wasn’t immediately clear what he had to say to the Taliban leadership but the Pakistani intelligence service has a strong influence on the Taliban.

Back to Top
Close
X
COVID-19 live updates: Popular music festival to continue with restrictions in place…In the NewsABCThe United States is facing a COVID-19 surge this summer as the more contagious delta variant spreads.More than 643,000 Americans have died from CO…

X
Willard Scott, weatherman on NBC's 'Today' show, dies at 87…In the NewsApWillard Scott, the beloved weatherman who charmed viewers of NBC’s “Today” show with his self-deprecating humor and cheerful personality, has died. …