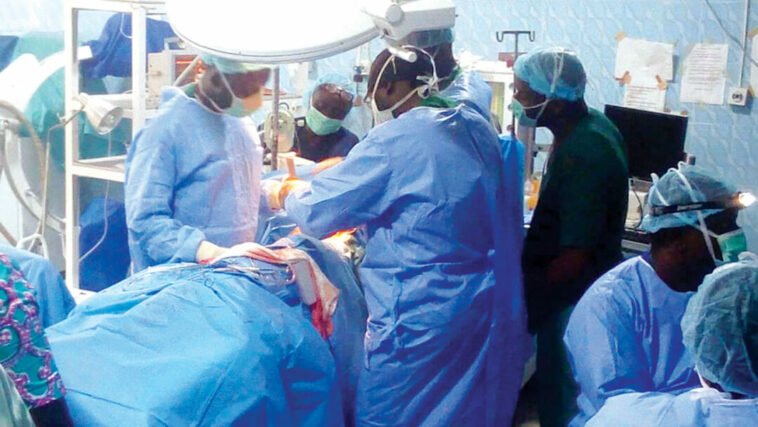 It is thus regretted that even in Africa’s so-called largest economy, doctors no longer see a bright future within the shores of the country because the conditions of work are pathetic and insufferable.

These poor working conditions may have led to the current lingering strike by resident doctors and the attempt by many of them to leave the country for greener pastures abroad. This is evident in the recruitment that was being conducted by the Saudi Arabian Ministry of Health, which the government was alleged to have reacted negatively to, as the State Security Service (SSS) was reported to have forcefully dispersed the participants; not discounting the fact that the Federal Government dragged the striking doctors to the industrial court.

This is a paradox, because in the recent past, the Minister of Labour and Employment, Dr. Chris Ngige, said that doctors who would like to relocate to other countries in search of greener pastures are free to do so, claiming that Nigeria has enough medical personnel to cater for the population.

Again, available evidence shows that 4,528 doctors moved to the United Kingdom in six years. Furthermore, figures released on February 2018 by the British government indicate that no fewer than 5,405 Nigerian-trained doctors and nurses are currently working with the British National Health Service (NHS) in the UK. This means that medics of Nigerian extraction constitute 3.9 per cent of the 137,000 foreign staff members out of 202 nationalities working alongside British doctors and nurses.

It should be worrisome that an old story of how so many developed and developing economies have been gaining brains from the country’s brain drain in the health sector is still on a continuum. This is a sad commentary on Nigeria’s development. It is unfortunate because Nigeria does not have enough medical doctors to serve the population. Available statistics show that the country has a doctor/patient ratio 1:6000 and in some areas, it could be worse with 1:10,000; against the World Health Organisation (WHO)’s recommendation of one doctor to 600 patients (1:600). So, it is obvious that for every 1000 people or patients, there is a shortage of 10 doctors.

Very sadly, there has been no indication that the country’s leadership is about to address the reproach as officials rather resort to medical tourism. Most of the nation’s leaders, including the president, fly abroad for treatment of every headache; an unacceptable situation in a country that once boasted of having one of the best four teaching hospitals in the Commonwealth. Sometime this year, President Muhammadu Buhari lamented the country’ had been losing N400 billion yearly to medical tourism. This attests to the government’s inability to address the various health challenges; thus validating some of the excuses for the exodus of doctors to other countries and perceptions that government at all levels in the country are not interested in the welfare and health of the citizens.

The indifference of the country’s duty bearers to her health sector challenge, which discounts the fact that the exodus of doctors is at the expense of the lives of Nigerians, is a paradox rolled into a tragedy. The more doctors leave this country, the higher the maternal and child deaths as well as very low life-span and expectancy. Besides, poor disease treatment outcomes can be worrisome.

This may account for Nigeria’s low ranking in global health index.

Based on the brain drain…

Back to Top
Close
X
EFCC’s Gestapo raids on hotels, residencesEditorialPunchIn commando-like fashion, the EFCC agents have developed a fondness for storming hotels and relaxation centres at odd hoursTHE show of shame bein…

X
APC, PDP crisesEditorialThe NationSmaller parties should rise to the occasion instead of being contented with crumbs from the big twoDemocracy as a system of government opera…