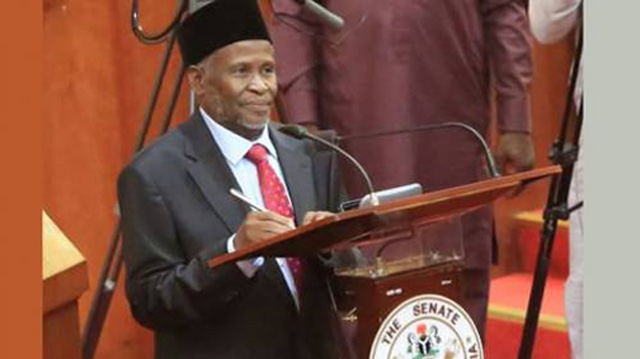 Two days ago, the Chief Justice of Nigeria, Justice Tanko Muhammad had cause to warn States’ Chief Judges, after summoning and meeting seven of them, to desist from indiscriminate granting of ex parte orders, especially on political issues and delivering conflicting judgements. That admonition cannot be more timely and precise, given the huge embarrassment that conflicting orders of courts of coordinate jurisdiction have been causing the judicature. That institution stands for the rule of law upon which democracy rests. It must not be allowed to be pulled down into disrepute. As the CJN observed: “A damage to one jurisdiction is a damage to all.”

It is equally instructive that Muhammad charged Chief Judges to take absolute charge in assigning cases, and ensuring that decorum in the judicial process is thoroughly observed. “Your job as heads of court is a sacred one, and it therefore includes you vicariously taking the sins of others,” Muhammad said, emphasising that three judges involved in the recent cases of rendering of conflicting orders would be investigated by the National Judicial Council (NJC).

The development is sequel to the recent ex-parte decisions delivered by High Courts in three different states (River, Kebbi and Cross River) all of which border on the suspension or otherwise of the Chairman of the Peoples Democratic Party (PDP), Mr. Uche Secondus, which again brought to the fore the nuisance of conflicting judgments by courts of coordinate jurisdiction, particularly on pre-election, post-election and political party leadership crisis. The situation has become a source of embarrassment to the judiciary. In 2018, the Chairman of the Independent National Electoral Commission (INEC), Professor Mahmood Yakubu, lamented the trend and pleaded for the intervention of the then Chief Justice of Nigeria, Walter Onnoghen. The INEC boss was quoted at the time to have said that on a matter involving the leadership of a political party, the Commission was served with six conflicting judgments and orders from courts of coordinate jurisdiction within a period of three months (May–July 2016) and that the Commission was confronted by conflicting pronouncements by the lower courts on matters already decided by the superior courts, including the Supreme Court.

Going by the decisions on the PDP chairman matter, not much has changed; in fact, a dangerous precedent was being set, which if left unchecked will worsen the problem of congested court dockets, and lead to a waste of public fund employed in these proceedings. According to the INEC Chairman, between 2016 and 2017, the Commission was involved in 454 court cases, in addition to 680 cases determined by the Election Petition Tribunals, arising from the outcomes of the 2015 General Elections, making a total of 1,134 cases for the period. At a time that stakeholders are worried about the budgetary allocation to the Commission, it is disheartening that huge percentage of the allocated sum is expended on needless litigations.

The NJC, saddled with the responsibility of upholding decency and discipline by judicial officers, needs to act fast, starting with full investigation of the three judges being referred to it, in order to salvage the battered image of the Judiciary. This ugly trend negates all known and acceptable laid down judicial principles, one of which forbids the further litigation of a subject matter involving the same parties and of the same issues.

Judges should be worried that while they lament disobedience of court orders, particularly by politicians and other government functionaries, questionable decisions emanating from the bench, will only serve to ridicule the judiciary and bring its integrity to disrepute, thus making its case a self inflicted injury. No one better than members of the Bench appreciates the principle of volenti non fit injuria. The perception of the common man observing the court’s proceedings is important in the administration of justice as justice must be seen to have been done lest the courts lose its due reverence, as people will defer to an authority where it is founded on truth and fairness. The NJC should ensure the discipline of erring judicial officers, as the sanctity of our temple of justice has to be preserved. Nigerians expect a detailed investigation by the commission, and any judicial officer found culpable should be accordingly sanctioned to deter future offenders.

Sadly, many senior lawyers, who as ministers in the temple of justice are obligated by their rules of conduct to disclose all facts including subsisting decided cases, as would aid the court in the just determination of issues brought before it, now fail in this regard; having placed pecuniary benefits above their professional creed. It is good that the Nigerian Bar Association (NBA) is planning to bring erring lawyers to book. The association should be firm in this resolve to warn off potential offenders in its membership.

Conflicting court orders are bound to arise where multiple court cases bordering on the same subject matter, parties and issues are instituted in different courts, particularly where the facts are misrepresented to the presiding judge. The habit of lawyers aiding litigants, particular politicians in forum shopping for courts from which they hope to receive favourable decisions, in spite of subsisting orders by a competent court, is an abuse of court process and should be condemned.

Legal practitioners, being officers of the court, should be reminded of the nobility associated with the profession and conduct themselves in a manner characterised by candour and fairness. They should be reminded that a client has no right to demand that his lawyer do or refrain from doing anything repugnant to his lawyer’s sense of honour or propriety; and he is obliged to decline the conduct of a civil cause or to make a defence when convinced that it is intended merely to harass or injure the opposite party or to occasion a miscarriage of justice.

The act of nation building …