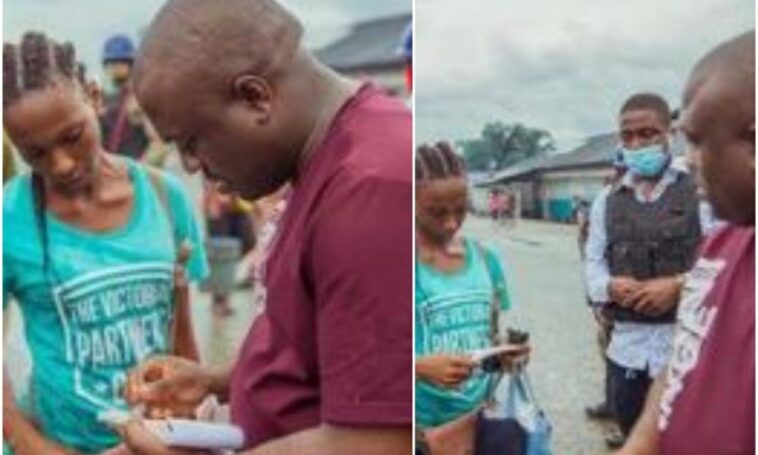 A Nigerian lady has got her account number padded with N500,000 for not raining curses after the convoy of a businessman, Marksman Chinedu Ijiomah accidentally splashed her with water.

According to the businessman who posted photos of the incident on his Facebook account revealed that the attitude of the young lady to the accident earned  her half a Million Naira reward.

He noted that despite the ongoing chaos and all, the lady did not curse, but merely cleaned herself up and moved on. Ijiomah said he apologized to her and gave her money.

Sharing the photos, he wrote; ‘today, on our way back from the day’s business, one of the protocol cars mistakenly splashed water on a young lady who was walking by. I am often alert and so when I observed her actions, I needed to apologize.

Unlike what a lot of people would do, the young lady did not scream or curse at our cars . She cleaned herself up without a word and walked on.

This act of calmness in the face of such chaos and disruption called my attention. Immediately, I instructed the cars to park and I called the young lady to apologize on behalf of my team. Of course, when she came, we apologized to her as much as words could convey and I asked her what she did for a living and when she said she was a fashion designer, we thought of the best way to assist her and eventually signed a cheque of half a million naira (500k) to her.

I dislike conducts that […]

X
Every officer in Missouri city police department resigns…Last PostYahooA small Missouri town lost its police chief and all the officers in the department after they abruptly announced their resignations.Three officer…