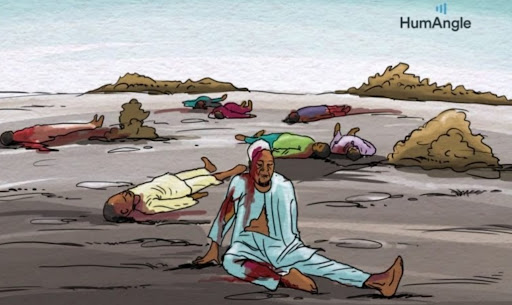 Alade Raheemat has not been to her hometown in Saki, Oyo State, Southwest Nigeria for five years and she’s not planning to leave Lagos anytime soon. She misses her parents and loved ones in the village but she is scared that her journey may end badly.

A petty trader at Obalende underbridge, she is barely struggling to make a living herself. Her fear is not the bumpy-jumpy road that leads to her village. It is not the lack of basic amenities such as potable water, sanitation, hospital, and many more.

Raheemat is simply scared that non-state actors now dictate how Nigerians live their lives. She has heard stories of kidnappings and how helpless residents are killed by various terror groups.

I can’t leave Lagos now. I can’t risk my life traveling on Nigerian roads and then end up being a victim of kidnap. I have seen people saying it is not as bad as but that is not true. Tell me a place that the criminals have not taken over. My problem now is not about lack of basic amenities in my village but my safety.”

As insecurity persists in Nigeria, there are many other citizens who share the same fear with Raheemat. In fact, multiple sources in various local communities in Nigeria told our reporter that they would prefer to be alive in rural communities without basic amenities than risk their lives traveling to the city.

HumAngle has on several occasions reported how lack of basic amenities such as roads, schools, hospitals and clean water cause harm to humanity.

The International Organisation for Migration (IOM) in 2019 said 1.8 million men, women and children displaced in the northeastern part of Nigeria lack access to water, shelter and other vital resources that make life comfortable.

Meanwhile, the few ones available have been taken over by non-state actors. While some terror groups force the shutdown of the education system in the Northwest, Northeast and North-Central Nigeria.

Separatists are enforcing “sit-at-home” in the Southeast and those who disobey them are being killed and have their properties burnt. The insecurity situation is the same in the Southwest and South-South.

“The country is sick of the basic development infrastructures like electricity to enhance the industrialisation of the nation in order to create employment opportunities,” Yemi Aliu, a lecturer at the department of economics in Obafemi Awolowo University, Ile-Ife, Osun State, said.

“The rate at which people are leaving the country now is alarming. Those who do not have money are even leaving Nigeria to nations like Ghana, Rwanda, and Ivory Coast. This is not just because of decaying infrastructure, it is because they cannot sleep with their two eyes closed.”

Read the full story in HumAngle

Nigerians no longer complain about basic amenities; they just want to live