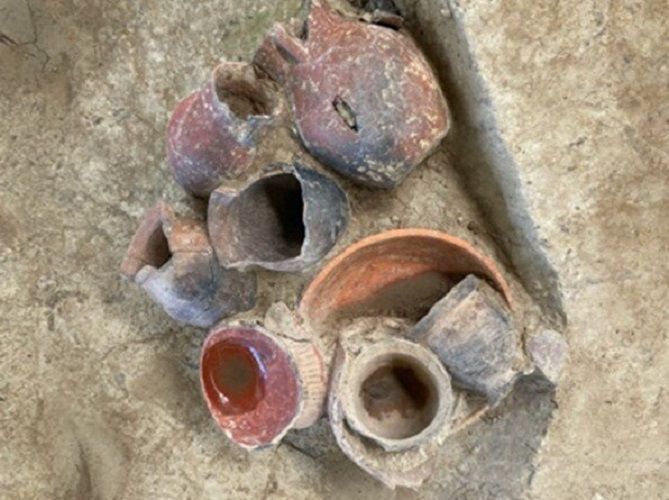 Archaeologists in southeastern China have discovered the residue of beer drunk 9,000 years ago. The vessels containing the ancient dregs were located near two human skeletons, suggesting that mourners may have consumed the brew in honor of the dead, reports Gizmodo’s Isaac Schultz.

The researchers found the Neolithic artifacts at the Qiaotou archaeological site, a circular settlement with a mound in the center located in Yiwu City, Zhejiang Province. They recently published their findings in the journal PLOS One.

Several long-necked hu pots discovered in pits at the site contained starches, fossilized plant residue and the remains of mold and yeast, indicating that they once held a fermented alcoholic beverage. Hu pots were used for drinking alcoholic beverages in later periods.

“Our results revealed that the pottery vessels were used to hold beer, in its most general sense—a fermented beverage made of rice, a grain called Job’s tears and unidentified tubers,” the study’s lead author, Jiajing Wang, an archaeologist at Dartmouth College, says in a statement. “This ancient beer though would not have been like the IPA that we have today. Instead, it was likely a slightly fermented and sweet beverage, which was probably cloudy in color.”

ScienceAlert’s David Nield writes that archaeologists try to determine the value ancient people placed on particular foods partly by considering how difficult it would have been to collect or produce them. Given the ingredients and the brewing process involved in making the beer, the researchers suggest it may have been part of a burial ceremony.

Qiaotou is one of about 20 archaeological sites in Zhejiang that were part of the Shangshan culture, which researchers believe was the first group to begin cultivating rice, around 10,000 years ago. Per Xinhua, researchers discovered the Shangshan sites, which date back as long as 11,400 years, between 2000 and 2020…

Back to Top
Close
X
Strange, repeating radio signal near the center of the Milky Way has scientists stumped…ScienceLive ScienceBy Brandon SpecktorIt's not a fast radio burst, pulsar or low-mass star. So what in the heavens is it?Astronomers have detected a strange,…

X
‘Fabled G-spot’:Scientists can’t find the G-spot either! Exper…More NewsDaily Mail The 'G-spot' may not really exist, researchers say. Portuguese scientists reviewed the evidence on the elusive region, which is said to giv…