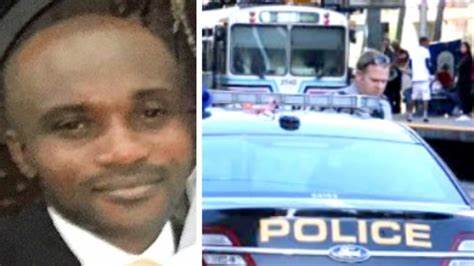 The second-degree murder trial has begun for a Calgary man accused of murdering a Nigerian father who was studying nursing at Bow Valley College.

On June 3, 2017, Nicholas Nwonye was fatally stabbed in a random attack at the City Hall CTrain platform as he waited for his train after classes.

Keeton Gagnon, 43, was arrested inside a CTrain car shortly after.

Just months earlier, Gagnon had been released from his third prison stint. He had been serving a three-year sentence for assault with a weapon.

Nwonye left behind wife and 3 kids

Nwonye, 46, had left his job as an engineer in Nigeria 18-months earlier to bring his family to Canada.

He was working two jobs to support his wife and three children, including an infant, while taking nursing courses at Bow Valley College.

On Monday, the first day of Gagnon’s seven-day trial, Court of Queen’s Bench Justice Michele Hollins heard that identity will not be an issue at trial.

Crown and defence have agreed it was Gagnon who fatally attacked Nwonye, a stranger to him.

Defence may argue the killing was not intentional and ask the judge to convict on manslaughter, a lesser offence than murder.