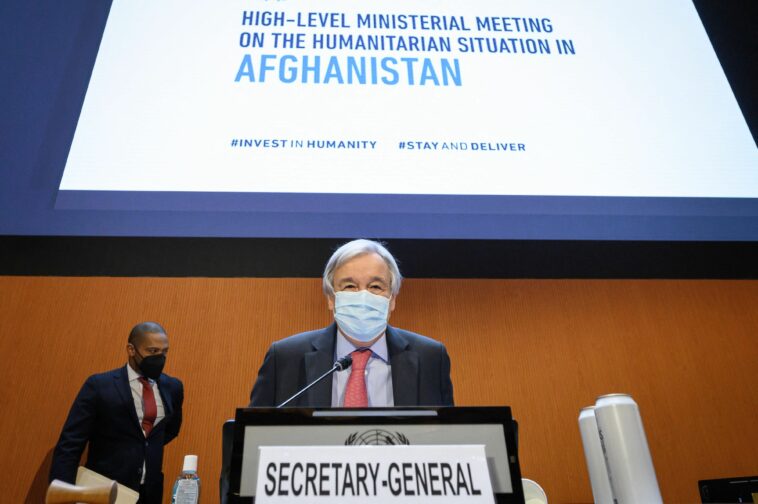 The UN called on Monday for more than $600 million for Afghanistan, where hunger and poverty are deepening after the Taliban seized control and western donors cut aid funding over concerns about the Islamist hardliners.

UN Secretary General Antonio Guterres told a donor conference in Geneva that Afghans faced “perhaps their most perilous hour” after decades of war and insecurity, and the chaotic exit of US and allied forces last month as the Taliban swept to power.

“The people of Afghanistan need a lifeline,” said Mr Guterres. “Now is the time for the international community to stand with them.”

Halfway through Monday’s meeting, Mr Guterres said more than $1 billion had been pledged to Afghanistan, but that it was not clear how much of that was directed to the UN’s emergency appeal.

As part of the appeal, the UAE pledged to carry out direct humanitarian projects in Afghanistan worth $50 million, the Foreign Ministry announced.

Mr Guterres did not refer to the Taliban by name, but said he had been in contact with Afghanistan’s new “de facto authorities” who he said had promised to “co-operate to ensure assistance is delivered to the people of Afghanistan”.

“The international community must find ways to make cash available to allow the Afghan economy to breathe — a total collapse would have devastating consequences to the people and risk to destabilise the neighbouring countries with a massive outflow,” he added.The people of Afghanistan are facing a humanitarian calamity.

This is the time for the international community to extend a lifeline and do everything we can – and everything we owe – to help them hold on to hope. https://t.co/ZX1koiribx

The Taliban ran Afghanistan from 1996 to 2001, blocking almost all rights for women. They were toppled in the US-led invasion of 2001 but regained power last month as the western-backed government in Kabul collapsed and the last western forces left.

Back to Top
Close
X
From zippers to glass, shortages of basic goods hobble U.S. economy…In the NewsReutersFor Lauren Rash, it’s the little things that have snarled production at her tent factory here, like the many shades of black Velcro.Her company…