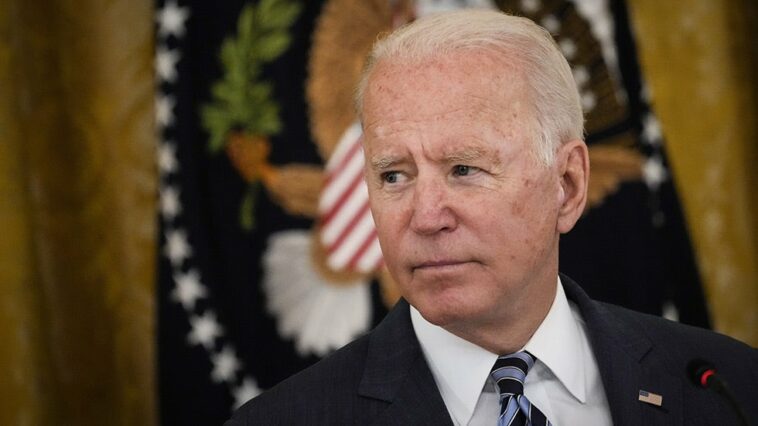 Simply put, the current 2022 outlook for Democrats is grim — and it could get even worse.

The marked decline in support for President Biden and his administration nationally and in key swing states indicates that the Democratic Party could endure a blowout defeat in the 2022 midterm elections.

Moreover, Biden is in a significantly weaker position now than both of his most recent Democratic predecessors — Bill Clinton and Barack Obama — at this point in their presidencies, which suggests that Democrats could suffer even more substantial losses in 2022 than the party did in 1994 and 2010.

Indeed, voters nationally and in seven key swing states disapprove, rather than approve, of the job Biden is doing by a margin of 7 points or greater, according to a Civiqs survey released last week.

Nationally, 50 percent of voters disapprove of the job Biden is doing as president, while just 42 percent approve.

For reference, at the same point in Obama’s first term, Obama’s net approval rating was 19 points higher than Biden’s is right now. At the time, a majority of voters (52 percent) approved of Obama, while 41 percent disapproved, according to a Gallup survey released on Sept. 13, 2009.

That being said, in the 2010 midterm elections, Democrats lost a net of 64 House seats and Republicans gained six seats in the Senate.

Yet in the 1994 midterms, Democrats lost a net of 52 House seats and Republicans picked up eight seats in the Senate.

To note, Democrats’ blowout midterm defeats in both 1994 and 2010 can be attributed in large part to their passage of massive spending and tax bills in the years prior.

The Democrats’ 1994 defeat came after they pushed through Congress the then-largest tax increase in history without any Republican support. And in 2010, Democrats lost due in large part to voters’ perception of an ineffective economic stimulus as well as governmental overreach on health care and the economy by the administration and congressional Democrats.

To note, a number of recent polls show that voters have grown increasingly negative on the Biden administration’s handling of major domestic issues, including the economy, COVID-19, immigration at the southern border and the withdrawal of U.S. troops from Afghanistan.

And now, with congressional Democrats having approved a budget blueprint in their $3.5 trillion dollar spending bill — which will bring massive tax increases and will likely increase the debt, deficit and inflation — the electoral backlash against Democrats could be even more substantial than in both 1994 and 2010.

In addition to Biden’s precipitous national decline, the president’s approval rating in key swing states, most of which he won in 2020, has dropped. This of course bodes poorly for Democrats’ 2022 prospects — and also makes it increasingly likely that Biden will be a one-term president — notwithstanding a dramatic turn of events in Democrats’ favor.

And in Michigan and Wisconsin — two swing states that were once reliably Democratic, both of which Biden won in 2020 — voters now disapprove of the president’s job performance by margins of 7 and 8 points, respectively.

It is noteworthy that, both nationally and in these key states, Biden’s approval has been driven down in large part by independent voters. Though Biden won national independent voters handily in 2020, a majority (58 percent) now disapprove of the president, while just 31 percent approve.

This data is clearly troubling for Democrats — especially when taken together with the fact that the mere circumstances of the 2022 midterms are challenging for the party. Republicans need to pick up just five House seats, and redistricting alone could cost Democrats close to or even more than that number.

Further, since World War II, only twice has the president’s party gained seats in the midterm elections — in 1998 and 2002, when both presidents had approval ratings over 60 percent and, even so, saw only meager House seat gains.

Simply put, the current 2022 outlook for Democrats is grim — and it could get even worse.

If the Biden administration…

Without drastic changes, Democrats are on track to lose big in 2022