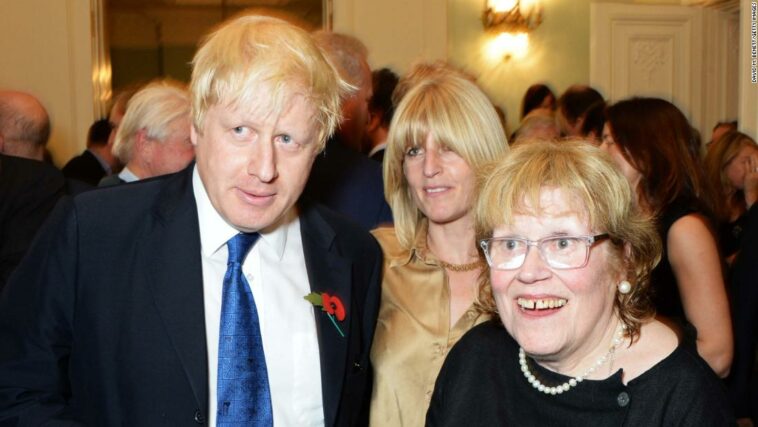 Charlotte Johnson Wahl, mother of UK Prime Minister Boris Johnson, has died at the age of 79 after suffering from Parkinson’s disease.

Johnson Wahl, née Fawcett, died “suddenly and peacefully” on Monday at St Mary’s Hospital in Paddington, west London, according to an announcement in The Times newspaper Tuesday.

In addition to the UK Prime Minister, Johnson Wahl had three more children — Rachel, Leo and Joseph — reads the announcement, with the names of 13 grandchildren listed.

“I am hugely saddened by Charlotte’s sudden death,” said Nell Butler, who is responsible for cataloging Johnson Wahl’s artwork and curated her 2015 retrospective, in a statement to CNN Tuesday.

“Johnson Wahl was a huge talent who continued to draw and paint almost until the end,” the statement continued. “She was driven to put things on paper. It was a language for her, a way of communicating the emotions and colour inside her head.”

Butler hailed Johnson Wahl’s “indomitable spirit” and said she “never complained, despite the burden of Parkinson’s and the indignities of old age.”

Born in 1942, Johnson Wahl studied English Literature at Oxford University before becoming a painter, according to her website.

She had sell-out shows at Maudsley Hospital, in south London, in 1974, in Brussels in the late 1970s and at the Gavin Graham gallery in London in 2004, reads the website. She also had a successful retrospective at London’s Mall Galleries in 2015.

Parkinson’s disease is a “progressive disorder of the nervous system,” according to the Mayo Clinic, that primarily affects a patient’s movement. It often starts with a small tremor in the hand or muscle stiffness and gets worse over time. Patients often have trouble walking and talking. Symptoms include slowness of movement, a loss of balance and slurred speech.

Despite her illness, she still painted every day, according to her website.

The Prime Minister’s office declined to comment on personal matters when contacted by CNN.

“I’m very sorry to learn of the Prime Minister’s loss,” wrote Starmer. “My condolences to him and his family.”

“As well as being a valued member of …

X
Empty promises and hot air: The West’s dismal failure to deliver on its pledges …Global NewsRTOf 554 million doses pledged by the world's richest nations, only 91 million, or 16%, have been delivered. Britain’s doing even worse, having sent j…