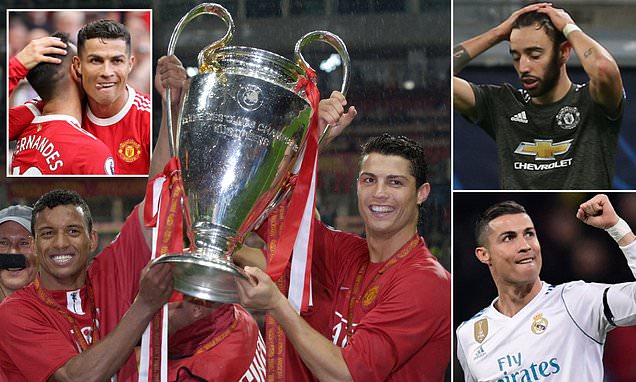 Cristiano Ronaldo has scored an INCREDIBLE 119 Champions League goals and lifted the trophy FOUR times in the 12 years since he left Man United… whereas his old side floundered year after year. Now can he take them back to glory?

The Portuguese had lit up the Champions League once more in 2008-09, including a brilliant performance in the semi-final second leg at Arsenal for Sir Alex Ferguson’s side.

He netted a long-range free-kick past a suspect Manuel Almunia before finishing off a stunning breakaway move emphatically that well and truly put the tie against Arsene Wenger‘s men to bed.

But ultimately he was outshone by his soon-to-be nemesis Lionel Messi in Rome as Pep Guardiola’s Barcelona won the 2009 Champions League final 2-0, including a brilliant header from the Argentine.

It remains to this day the only Champions League final he has lost, and the defeat came just 12 months on from a Ronaldo-inspired United winning their first Champions League crown since 1999, beating fellow Premier League outfit Chelsea on penalties in Russia.

That 2007-08 season saw Ronaldo deliver his best goalscoring return in Europe for United, netting seven to help get them to Moscow before heading in the opener against the Blues in the first half.

The euphoria that would follow that night for the red half of Manchester – despite Ronaldo’s miss from the spot in the shootout – has not been rivalled since.

The closest they have come since that victory is the Rome final and another painful defeat in a Champions League final to the Catalan outfit at Wembley two years later.

But the swagger and feel-good factor definitely made a return to Old Trafford on Ronaldo’s stunning second home debut for United at the weekend, which has left fans salivating at the prospect of what he could do on his second European bow for the club.

The Portuguese fired in a goal in each half – efforts that gave Ole Gunnar Solskjaer’s men a 1-0 and 2-1 lead – against Newcastle as fans chanted ‘Viva Ronaldo’ in the Stretford End.

There was more than an air of positivity around the club in the build-up to the match and the 90 minutes itself,  and now one of the major stars of the Champions League for well over a decade will now test himself in that competition once more.

The 36-year-old netted 16 goals in 55 Champions League appearances during his first stint at Old Trafford, and he will now look to add to that tally when United face Swiss outfit Young Boys on Tuesday evening.

But there are far more impressive statistics provided by Opta which highlight the extent to which he has definitely set the standard in the competition since leaving Old Trafford.

Ronaldo has scored an incredible 119 goals for Real Madrid and Juventus combined since his mega-money move to the Spanish giants in 2009. And that in just 124 games.

The Portugal international is therefore unrivalled when it comes to goals scored in the Champions League since that 2009 final, with Lionel Messi 16 behind on 103. Bayern Munich star Robert Lewandowski is another 30 short of the Argentine.

Karim Benzema and Thomas Muller make up the top five, but the Real Madrid and Bayern Munich stars have scored a comparatively modest 59 and 47 goals in the Champions League since the start of the 2009-10 season.

There is therefore an incredibly large gap of more than 100 goals between Ronaldo and his nearest United competitor for goals scored in the Champions League since his departure.

The Portuguese’s former team-mate and United record goalscorer Wayne Rooney is the club’s highest scorer in the Champions League during this time period, but scored just 15 goals in that time prior to his departure in 2017.

Current United striker Edinson Cavani has however netted 35 goals since the 2009-10 season in the Champions League, but they all came for Serie A outfit Napoli and PSG.

Ronaldo’s dominance in the competition is such that United as a club have only scored five more goals than their returning star in the Champions League since 2009 – 124 to be precise – and they have won nine fewer games than him in that period.

The 36-year-old meanwhile enjoyed tremendous European success in the previous decade, winning four Champions League titles while he was playing under Carlo Ancelotti and Zinedine Zidane for LaLiga giants Madrid.

But it is his return in front of goal that has been simply mesmerising. Add 31 assists to that and the fact he was on the losing side on just 18 occasions – three fewer than United in the same period – it is easy to see why the likes of Gary Neville believe he is the greatest player ever.

United meanwhile have competed in the Champions League in 10 of their 12 seasons since, and have won 41 of their 77 matches in Europe’s premier club competition.

The club have dropped into the Europa League after finishing outside of the top two in the Champions League group stages on three occasions, as well as qualifying for the group stage of the second-tier European competition twice.

The most recent case of the former was last season, when they suffered a 3-2 reverse by RB Leipzig on the final matchday to finish below the Bundesliga outfit and eventual semi-finalists Paris Saint-Germain in Group H.

Their Europa League record received a boost as a result last season, making it all the way to the final before a penalty shootout defeat by Villarreal in Gdansk.

But their most successful run in the competition is when they qualified directly for it, going all the way in 2016-17 from the group stages to the final, where they beat Ajax to win what remains their latest piece of silverware.

The club’s overall record in that competition since Ronaldo’s departure includes 25 wins in 44 games, 82 goals scored – with Bruno Fernandes top scoring with eight – two finals reached, and one trophy won.

But if his speech before the Newcastle game is anything to go by, Ronaldo has no intention of featuring in the Europa League for the first time at Old Trafford.

The Portuguese gave a rousing speech before his second United debut at the weekend, in which he reportedly said: ‘I have returned to Man United for two reasons.

‘The first is because I love the club. The second is I love the winning mentality that breeds through the ranks of this club.

‘I have not come back to be a cheerleader. If you guys want to succeed, then I need you to love this club from the bottom of your hearts.

‘You need to eat, sleep and fight for this club. Whether you play or do not play, you need to support your team-mates and always give 100 per cent for the club.

‘I am here to win and nothing else. Winning brings us happiness. I want to be happy, do you?’

The comments show a clear winning mentality, which he has no better demonstrated that he wishes to be part of a side that dominates European competition once more.

Ole Gunnar Solskjaer has claimed this week that United can rule Europe following the arrivals of Ronaldo and centre-back Raphael Varane.

‘We’re getting the spine of the team, and you can see the experience and quality,’ said Solskjaer.

‘Of course, with Raphael and Cristiano coming in, they add that last… not last bit, you can never say it’s the last bit. It’s something extra we have to buy unless you win it four times yourself.

‘That was always the plan when I came in, that we had a squad with experience and quality to challenge. The atmosphere is really good and that’s definitely going to stand us in good stead.’

And with Ronaldo’s record laid bare in comparison to United’s, it is clear they stand a much better chance of achieving that goal with the Portuguese now back among their ranks and raring to go.

Back to Top
Close
X
Kanté, Pulisic to miss Zenit bout, but Tuchel could give time to Chelsea’s forgotten men…UncategorizedBy Fellipe Miranda  Chelsea return to Champions League football tomorrow night to start our title defence with a group stage battle against Zenit St. …