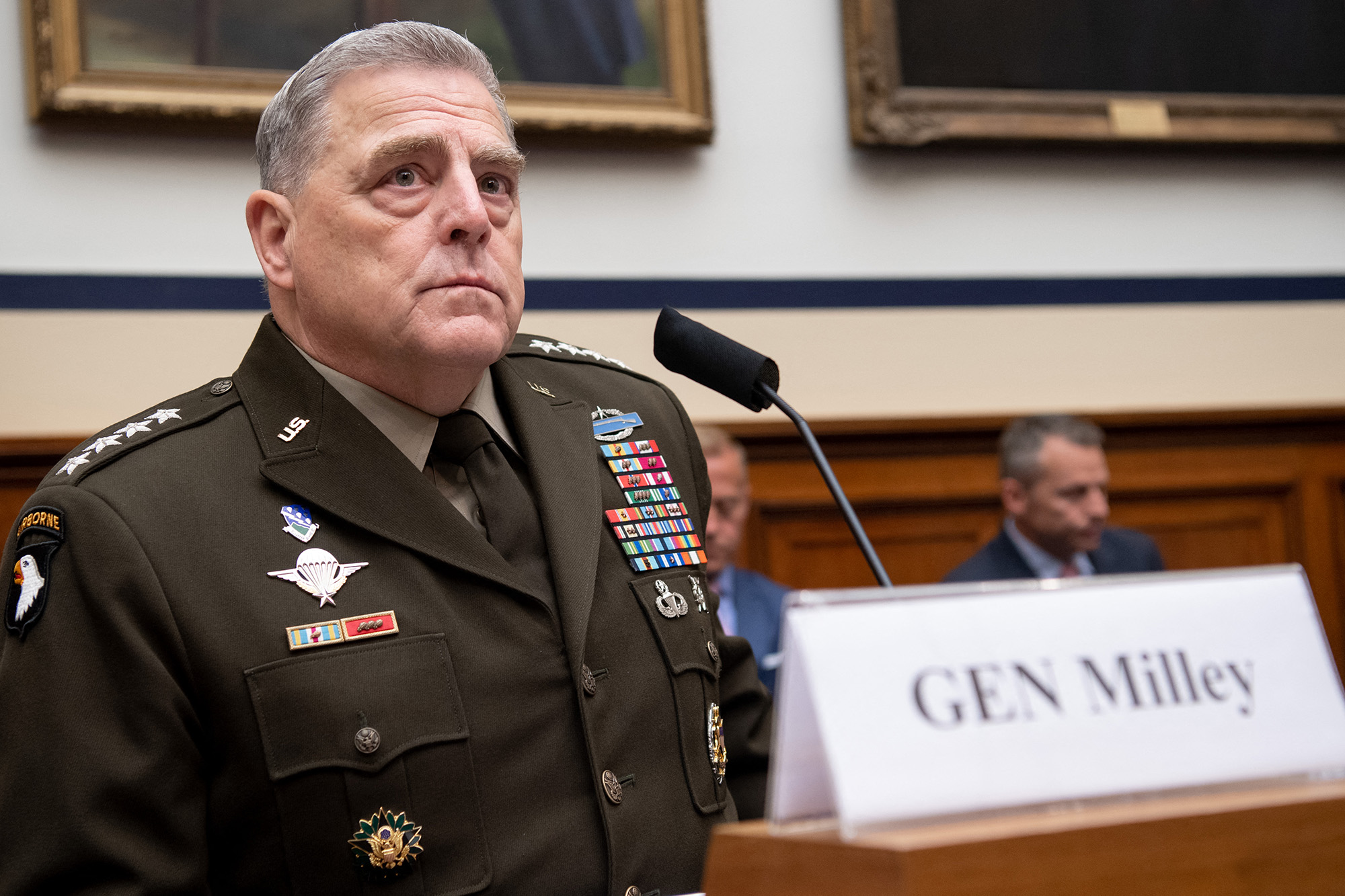 Twice in the final months of the Trump administration, the country’s top military officer was so fearful that the president’s actions might spark a war with China that he moved urgently to avert armed conflict.

In a pair of secret phone calls, Gen. Mark Milley, the chairman of the Joint Chiefs of Staff, assured his Chinese counterpart, Gen. Li Zuocheng of the People’s Liberation Army, that the United States would not strike, according to a new book by Washington Post associate editor Bob Woodward and national political reporter Robert Costa.

One call took place on Oct. 30, 2020, four days before the election that unseated President D0nald Trump, and the other on Jan. 8, 2021, two days after the Capitol siege carried out by his supporters in a quest to cancel the vote.

The first call was prompted by Milley’s review of intelligence suggesting the Chinese believed the United States was preparing to attack. That belief, the authors write, was based on tensions over military exercises in the South China Sea, and deepened by Trump’s belligerent rhetoric toward China.

“General Li, I want to assure you that the American government is stable and everything is going to be OK,” Milley told him. “We are not going to attack or conduct any kinetic operations against you.”

In the book’s telling, Milley went so far as to pledge he would alert his counterpart in the event of a U.S. attack, stressing the rapport they’d established through a backchannel. “General Li, you and I have known each other for now five years. If we’re going to attack, I’m going to call you ahead of time. It’s not going to be a surprise.”

Li took the chairman at his word, the authors write in the book, “Peril,” which is set to be released next week.

In the second call, placed to address Chinese fears about the events of Jan. 6, Li wasn’t as easily assuaged, even after Milley promised him, “We are 100 percent steady. Everything’s fine. But democracy can be sloppy sometimes.”

Li remained rattled, and Milley, who did not relay the conversation to Trump, according to the book, understood why. The chairman, 62 at the time and chosen by Trump in 2018, believed the president had suffered a mental decline after the election, the authors write, a view he communicated to House Speaker Nancy Pelosi (D-Calif.) in a phone call on Jan. 8. He agreed with her evaluation that Trump was unstable, according to a call transcript obtained by the authors.

Believing that China could lash out if it felt at risk from an unpredictable and vengeful American president, Milley took action. The same day, he called the admiral overseeing the U.S. Indo-Pacific Command, the military unit responsible for Asia and the Pacific region, and recommended postponing the military exercises, according to the book. The admiral complied.

Milley also summoned senior officers to review the procedures for launching nuclear weapons, saying the president alone could give the order – but, crucially, that he, Milley, also had to be involved. Looking each in the eye, Milley asked the officers to affirm that they had understood, the authors write, in what he considered an “oath.”

The chairman knew that he was “pulling a Schlesinger,” the authors write, resorting to measures resembling the ones taken in August 1974 by James Schlesinger, the secretary of defense at the time. Schlesinger told military officials to check with him and the chairman of the Joint Chiefs before carrying out orders from President Richard Nixon, who was facing impeachment at the time.

Though Milley went furthest in seeking to stave off a national security crisis, his alarm was shared throughout the highest ranks of the administration, the authors reveal. CIA Director Gina Haspel, for instance, reportedly told Milley, “We are on the way to a right-wing coup.”

The book also provides fresh reporting on President Joe Biden’s campaign – waged to unseat a man he told a top adviser “isn’t really an American president” – and his early struggle to govern. During a March 5 phone call to discuss Biden’s $1.9 trillion stimulus plan, his first major legislative undertaking, the president reportedly told Sen. Joe Manchin III, D-W.Va., “if you don’t come along, you’re really f—ing me.” The measure ultimately cleared the Senate through an elaborate sequencing of amendments designed to satisfy the centrist Democrat.

The president’s frustration with Manchin is matched only by his debt to House Majority Whip Rep. James Clyburn of South Carolina, whose endorsement before that state’s primary propelled Biden to the nomination and gave rise to promises about how he would govern.

When Clyburn offered his endorsement in February 2020, it came with conditions, according to the book. One was that Biden would commit to naming a Black woman to the Supreme Court, if given the opportunity. During a debate two days later, Clyburn went backstage during a break to urge Biden to reveal his intentions for the Supreme Court that night. Biden issued the pledge in his final answer, and the congressman endorsed him the next day.

“Peril,” the authors say, is based on interviews with more than 200 people, conducted on the condition they not be named as sources. Exact quotations or conclusions are drawn from the participant in the described event, a colleague with direct knowledge or relevant documents, according to an author’s note. Trump and Biden declined to be interviewed.

On Afghanistan, the book examines how Biden’s experience as vice president shaped his approach to the withdrawal. Convinced that President Barack Obama had been manipulated by his own commanders, Biden vowed privately in 2009, “The military doesn’t f— around with me.”

It also documents how Biden’s top advisers spent the spring weighing, but ultimately rejecting, alternatives to a full withdrawal. Secretary of State Antony Blinken and Defense Secretary Lloyd Austin returned from a NATO meeting in March envisioning ways to extend the mission, including through a “gated” withdrawal seeking diplomatic leverage. But they came to see that meaningful leverage would require a more expansive commitment, and instead came back around to a full exit.

Milley, for his part, took what the authors describe as a deferential approach to Biden on Afghanistan, in contrast to his earlier efforts to constrain Trump. The book reveals recent remarks the chairman delivered to the Joint Chiefs in which he said, “Here’s a couple of rules of the road here that we’re going to follow. One is you never, ever ever box in a president of the United States. You always give him decision space.” Referring to Biden, he said, “You’re dealing with a seasoned politician here who has been in Washington, D.C., 50 years, whatever it is.”

His decision just months earlier to place himself between Trump and potential war was triggered by several important events – a phone call, a photo op and a refusal to rule out war with another adversary, Iran.

The immediate motivation, according to the book, was the Jan. 8 call from Pelosi, who demanded to know, “What precautions are available to prevent an unstable president from initiating military hostilities or from accessing the launch codes and ordering a nuclear strike?” Milley assured her that there were “a lot of checks in the system.”

The call transcript obtained by the authors shows Pelosi telling Milley, referring to Trump, “He’s crazy. You know he’s crazy. … He’s crazy and what he did yesterday is further evidence of his craziness.” Milley replied, “I agree with you on everything.”

Milley’s resolve was deepened by the events of June 1, 2020 when he felt Trump had used him as part of a photo op in his walk across Lafayette Square during protests that began after the killing of George Floyd. The chairman came to see his role as ensuring that, “We’re not going to turn our guns on the American people and we’re not going to have a ‘Wag the Dog’ scenario overseas,” the authors quote him saying privately.

Trump’s posture, not just to China but also to Iran, tested that promise. In discussions about Iran’s nuclear program, Trump declined to rule out striking the country, at times even displaying curiosity about the prospect, according to the book. Haspel was so alarmed after a meeting in November that she called Milley to say, “This is a highly dangerous situation. We are going to lash out for his ego?”

Trump’s fragile ego drove many decisions by the nation’s leaders, from lawmakers to the vice president, according to the book. Sen. Mitch McConnell, R-Ky., was so worried that a call from President-elect Biden would send Trump into a fury that the then-Majority Leader used a backchannel to fend off Biden. He asked Sen. John Cornyn of Texas, formerly the No. 2 Senate Republican, to ask Sen. Christopher Coons, the Democrat of Delaware and close Biden ally, to tell Biden not to call him.

So intent was Pence on being Trump’s loyal second-in-command – and potential successor – that he asked confidants if there were ways he could accede to Trump’s demands and avoid certifying the results of the election on Jan. 6. In late December, the authors reveal, Pence called Dan Quayle, a former vice president and fellow Indiana Republican, for advice.

Quayle was adamant, according to the authors. “Mike, you have no flexibility on this. None. Zero. Forget it. Put it away,” he said.

But Pence pressed him, the authors write, asking if there were any grounds to pause the certification because of ongoing legal challenges. Quayle was unmoved, and Pence ultimately agreed, according to the book.

When Pence said he planned to certify the results, the president lashed out. In the Oval Office on Jan. 5, the authors write, Pence told Trump he could not thwart the process, that his role was simply to “open the envelopes.”

“I don’t want to be your friend anymore if you don’t do this,” Trump replied, according to the book, later telling his vice president, “You’ve betrayed us. I made you. You were nothing.”

Within days, Trump was out of office, his governing power reduced to nothing. But if stability had returned to Washington, Milley feared it would be short-lived, the authors write.

The general saw parallels between Jan. 6 and the 1905 Russian Revolution, which set off unrest throughout the Russian Empire and, though it failed, helped create the conditions for the October Revolution of 1917, in which the Bolsheviks executed a successful coup that set up the world’s first communist state. Vladimir Lenin, who led the revolution, called 1905 a “dress rehearsal.”

A similar logic could apply with Jan. 6, Milley thought as he wrestled with the meaning of that day, telling senior staff: “What you might have seen was a precursor to something far worse down the road.”

This Story First Appeared At The Anchorage Daily News

Top general was so fearful Trump might spark war that he made secret calls to his Chinese counterpart, new book says