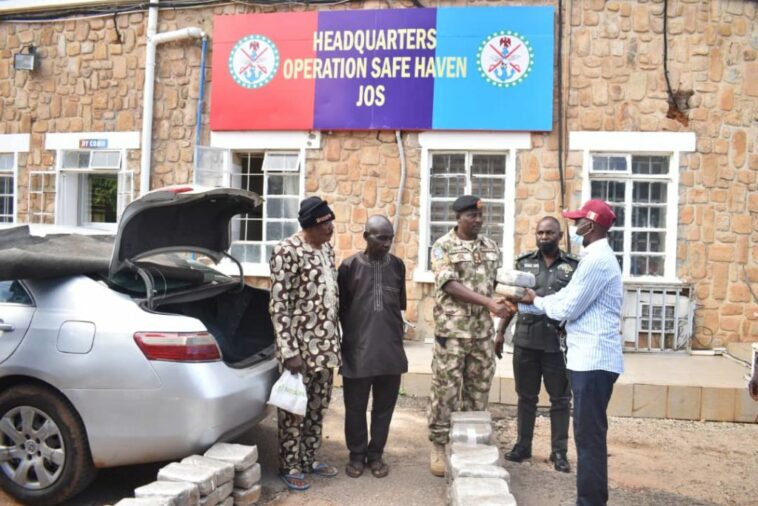 JOS – Troops of Operation SAFE HAVEN (OPSH) on Tuesday burst a drug syndicate and recovered 248 blocks of substance suspected to be cannabis estimated to be about 7.5 million naira.

The substance was said to have been concealed in a Toyota Camry car with registration number Lagos, KJA 150 EG.

The suspects Ex-Corporal Essien Friday, a 60 year old retired Army personnel and 50 year old Ibrahim Ali were arrested by the troops during stop and search operation along road Manchok – Jos in Kaura LGA of Kaduna state.

The suspects claimed that they were contracted to convey the illicit substance to Yola, Adamawa State from Ondo State.

Other items recovered from the suspects include 18 wraps of Indian hemp , 2 smartphones, 3 travelling bags, one lighter and 2 wallets containing Five Hundred and Seventy Naira (N570) only.

Back to Top
Close
X
Soldier, Bandit Killed As Gunmen Abduct Woman, Children In Zaria…In the NewsHeadlines – Channels Television A file photo of a gun recovered from criminals. A soldier has been reported killed and four persons abducted by bandit…

X
We're working behind the scenes for more women in N/Assembly -Omo-Agege…In the NewsDaily TrustDeputy Senate President, Ovie Omo-Agege, says the Senate Committee on Review of 1999 Constitution is working ‘behind the scenes’ to pave th…