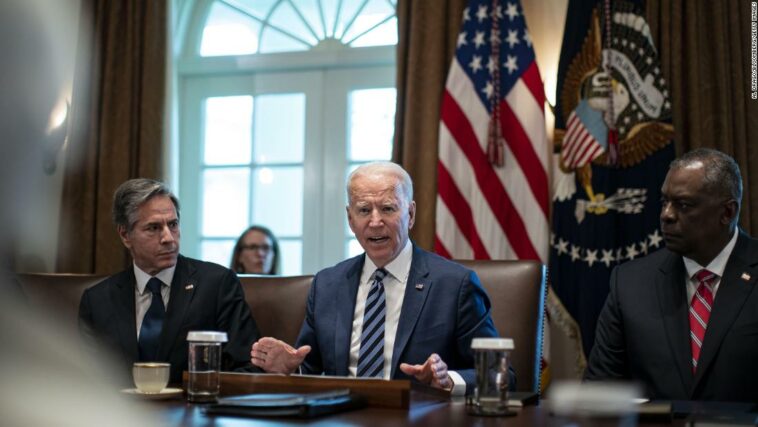 In their new book “Peril,” journalists Bob Woodward and Robert Costa explore the opening months of Joe Biden’s presidency, including how Biden was hellbent not to let the military stop him from withdrawing from Afghanistan and how Donald Trump’s shadow hangs over the Biden presidency.

The book explores Biden’s determination to withdraw US troops from Afghanistan despite resistance from top advisers. Biden was resolute on getting US troops out, having wrestled with the issue for nearly 20 years — and having watched, as vice president, military and national security leaders box in then-President Barack Obama in his first year when he wanted to end the US war in Afghanistan.

“The military doesn’t fuck around with me,” Biden told others in 2009, implying they had with Obama, according to the book.

CNN obtained a copy of ‘Peril” ahead of its September 21 release.

Woodward and Costa write that Biden’s Secretary of State Antony Blinken and Defense Secretary Lloyd Austin both pushed for a slower withdrawal. After a March meeting of NATO ministers, Blinken changed his recommendation about removing all US troops.

“Previously, he had been foursquare with Biden for a full withdrawal,” the authors write. “His new recommendation was to extend the mission with US troops for a while to see if it could yield a political settlement. Buy time for negotiations.”

Blinken told Biden on a call from Brussels he was hearing from the other NATO ministers “in quadraphonic sound,” or surround sound, that the US should leverage its departure to gain concrete steps toward a political settlement, according to the book.

Austin also came up with a new proposal at around the same time, the authors write, proposing a “gated” withdrawal in three or four stages that would provide leverage for diplomatic negotiations.

But Biden was unconvinced and determined not to allow “mission creep” to justify keeping US troops there. “Our mission is to stop Afghanistan from being a base for attacking the homeland and US allies by al Qaeda or other terrorist groups, not to deliver a death blow to the Taliban,” Biden said, according to the book, during one of 25 National Security Council meetings held during a robust foreign policy review.

While much of “Peril” focuses on the end of the Trump presidency and his hold on the GOP after leaving office, Woodward and Costa devote a significant portion of the book to the Biden administration. The book traces the arc of Biden’s initial decision to run for the White House into the first months of his presidency, detailing conversations with lawmakers including GOP Sen. Susan Collins of Maine and Democratic Sen. Joe Manchin of West Virginia as Biden negotiates a massive Covid-19 relief package.

Biden and his advisers hated to utter Trump’s name, Woodward and Costa write, and aides “frequently warned each other to please avoid the ‘T’ word.” In the White House one night, Biden discovered a room where a huge screen covered the wall, which Trump used to virtually play famous golf courses, according to the book.”What a fucking asshole,” Biden once said of Trump, according to the authors.

Trump was also consumed with Biden after leaving office, according to the book. He told a group of friends and donors he golfed with that he was thinking of using his private plane to taunt Biden and…