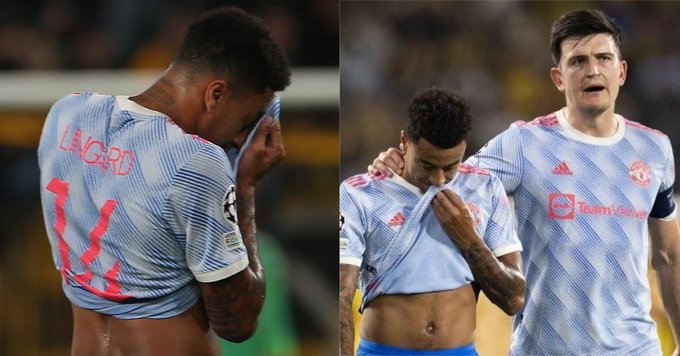 Jesse Lingard was the villain for Manchester United as his poor backpass gave Young Boys a last-gasp winner to consign the Red Devils to defeat in their first Champions League game.

In front of a raucous atmosphere at the Wankdorf Stadium in Bern, Cristiano Ronaldo got United’s evening off to the perfect start by netting his third goal in two matches since returning to the club, slotting home after Bruno Fernandes’ exquisite cross.

But the game turned on its head when United’s Aaron Wan-Bissaka received a straight red card for a high challenge on Young Boys’ Christopher Martins. The Swiss side dominated the match ever since.

Jesse Lingard’s poor backpass allowed Jordan Siebatcheu to net the winner in the last kick of the game in Bern, Switzerland

The second-half saw Young Boys control the entire play, with Moumi Ngameleu poking the Swiss side level by getting ahead of substitute Raphael Varane in the penalty box.

And with the match appearing to head towards a draw, Lingard tried to find David de Gea but his backpass was careless, leaving American striker Jordan Siebatcheu to tuck past the United goalkeeper.

X
I cannot complain about the attitude, but there is a difference in quality ̵…Champions LeagueAdmitted Bayern Munich were superior at the Camp Nou By C. NAVARRO Adapted by PANOS KOSTOPOULOS Ronald Koeman expressed his confidence that Barcelona …