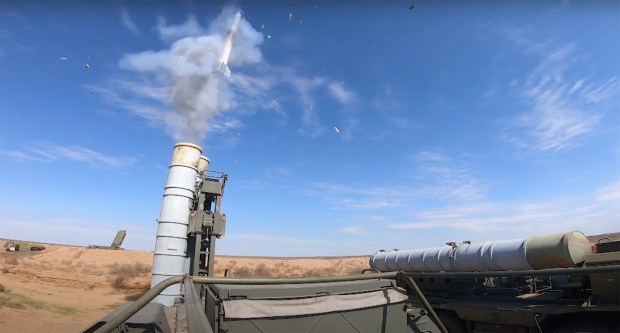 RUSSIA has ramped up its war games as it practices ‘invading” Poland and Lithuania – both NATO countries – during the terrifying drills.

Moscow and its neighbour Belarus have reportedly stepped up its show of military strength while Vladimir Putin has gone into self-isolation after a close aide contracted Covid.

The move comes in effort to supposedly repel a huge strike by a “mock enemy” at the climax of the exercises.

Carried out in the Astrakhan region, the drills – which also included the Triumph air defence system – were part of this year’s war games.

The Zapad-2021 exercises – or West-2021, in English – were launched by the Kremlin days ago as a warning to the West.

They involve a total of 200,000 troops, 80 warplanes and helicopters, plus some 760 pieces of military equipment including 290 tanks, and 240 artillery pieces, multiple launcher rocket systems, and mortars.

Polish newspaper Fakt reported: “This is how they practice WAR with Poland.

“The stench of gunpowder and the clang of iron. The war murmurs of Russia and Belarus can be heard across our eastern border,” read the account.

“Thousands of soldiers, hundreds of planes, helicopters, rocket launchers and tanks are taking part in the Zapad-2021 manoeuvres.”

While officially the drills are “defensive” the newspaper claimed that fictitious names are being used for Poland as the Polar Republic, and Lithuania as the State of Neris.

Estonian defence minister Kalle Laanet accused Russia and its ally of a “deliberate attempt to destabilise the security of the Baltic Sea region and to cause a split in allied relations within Nato and the European Union”.

The exercises stretch from the Baltic to the Caspian Sea, while separate drills have been underway in the Arctic and Russian far east.

Russia insisted that Putin was “absolutely healthy” and that his self-isolation was precautionary.

X
The Taliban tears itself apart: ‘Terrorist faction’ wins huge brawl …Rifs  Daily Mail The Taliban has descended into bitter in-fighting with so-called 'moderates' thought to be at war with terrorist hardliners as both …