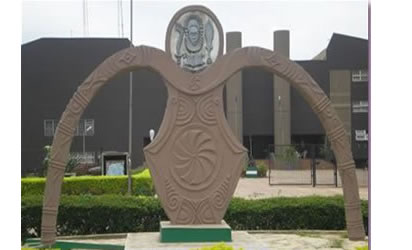 Moments after she was forced to address protesting students at the university main gate, the Vice-Chancellor of the University of Benin (UNIBEN), Professor Lilian Imuetiyan Salami, on Wednesday evening reached a peace agreement with the protesting students.

Professor Salami, it was gathered, agreed to rescind the decision on the imposition of N20,000 late registration fee on the students.

The Vice-Chancellor equally cancelled the directive for the “immediate” closure of the school, earlier issued in the day

She was also said to have agreed that no student would be punished or victimised for taking part in the protest, especially her “abduction” from her official lodge to the university’s main gate, where she agreed to the terms of the protesting students.

Before she was finally let off by the restive students, Professor Salami, also agreed to set in motion, plans to relieve the university’s Public Relations Officer, Dr Benedicta Ehanire and the Dean of Students Affairs, Professor Patrick Igbinaduwa, of their positions.

The students were said to have been irked by the “impudence” of Dr Ehanire, whenever she had cause to interface with the student’s population and the kind of languages she deployed in her communications with the students.

Professor Igbinaduwa’s “sin”, a student source said, ” is his nonchalant attitude to the issues that led to the protest in the first place”.

Back to Top
Close
X
Many Feared Dead, Others Injured As Jet Reportedly Bombs Yobe Community…In the NewsHeadlines – Channels Television A map of Yobe, a state in north-east Nigeria. Several persons have reportedly been killed and others injured in an aer…

X
APC: FG borrowing to uplift living standards of Nigerians…buhariThe CableThe All Progressives Congress (APC) says the loans obtained by the  President Muhammadu Buhari administration are borne of the desire to…