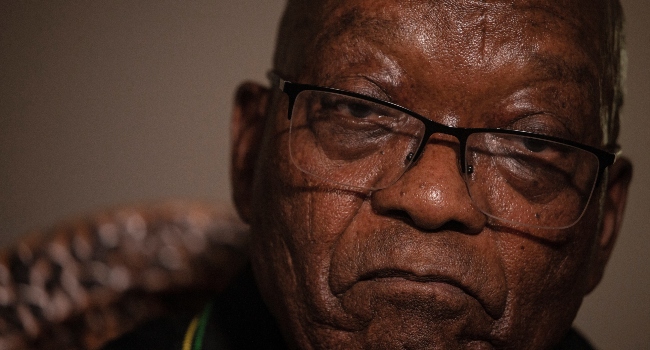 South Africa’s highest court on Friday stood by its order to imprison Jacob Zuma, accusing the former president of “litigious skullduggery” in a scathing ruling that accused him of undermining the courts.

The case however does not affect Zuma’s release on medical parole earlier this month, which sparked an uproar amid allegations of irregularities in the parole process.

His jailing in July sparked the worst outbreak of political violence since the end of apartheid, as his supporters staged violent protests that devolved into widespread looting of malls and warehouses.

The 79-year-old had asked the Constitutional Court to rescind its decision to sentence him to 15 months in prison for refusing to answer questions in a corruption investigation.

“The application for recision is dismissed,” said Justice Sisi Khampepe.

Zuma’s lawyers had argued that the decision should be rescinded because he had not attended the proceedings.

“The majority emphatically reject any suggestion that litigants can be allowed to butcher of their own will a judicial process which in all respects has been carried out with the utmost degree of regularity, only to later plead the absent victim,” Khampepe said.

Back to Top
Close
X
DR Congo president seeks review of mining contracts with China…AfricaAl JazeeraDemocratic Republic of the Congo is seeking what it says is a fairer share of its vast mineral wealth.Felix Tshisekedi, the president of the…

X
Sako: Our quest for Federal Republic of Ambazonia is of no threat to Nigeria…AfricaThe GuardianBy Chinonso IhekireDr. Samuel Ikome Sako is the president of the internationally unrecognised proto-state of British Southern Cameroons, t…