Lionel Messi will make £25.6m in each of the next two seasons at Paris St-Germain, with the 34-year-old Argentina forward’s salary due to rise by a further £8.5m if he stays for a third year. (L’Equipe, via Marca)

Matthijs de Ligt’s agent Mino Raiola says the Dutch centre-back could leave Juventus at the end of the season, with Chelsea interested in signing the 22-year-old. (Tuttosport, via Express)

Manchester United striker Edinson Cavani does not want to leave Old Trafford even though the 34-year-old Uruguayan is now competing with Ronaldo for a starting spot. (ESPN Brazil – in Portuguese)

Aston Villa defender Matty Cash will be approached by Poland ahead of the next round of World Cup qualifiers because the 24-year-old qualifies to play for the country through family on his mother’s side. (Mail)

Wolves boss Bruno Lage has warned Manchester United and Arsenal that he will not let Portugal midfielder Ruben Neves, 24, leave without a fight. (Express)

Liverpool goalkeeper Alisson says he would like to rejoin Brazilian side Internacional if given the chance at some point, but the 28-year-old is “happy” after recently signing a six-year contract at Anfield. (Soccer Saturday, via Mirror)

Barcelona head coach Ronald Koeman is considering leaving Spain full-back Sergi Roberto, 29, out of Monday’s game against Granada to protect him after he was jeered off the pitch during Tuesday’s loss to Bayern Munich. (Marca) 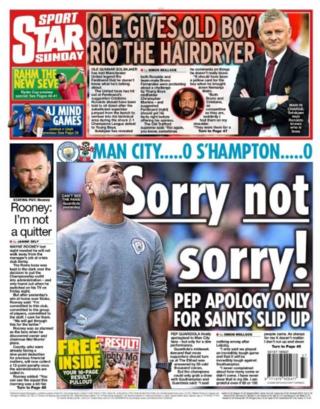