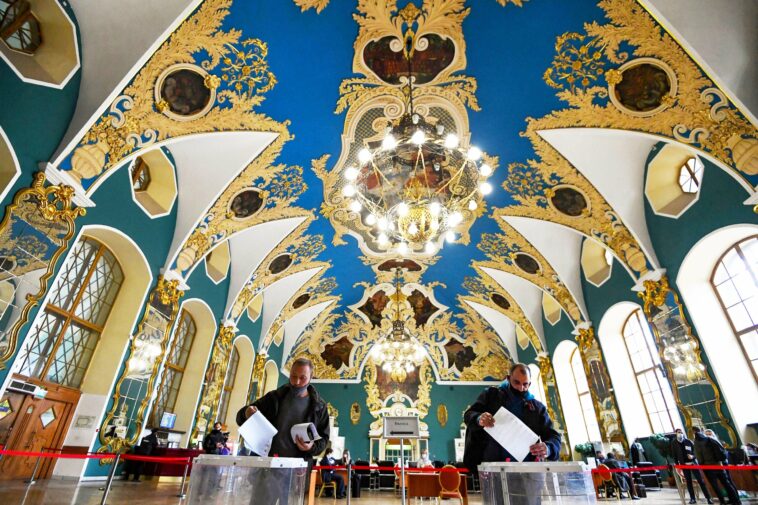 When polls closed on Sunday night (19 September), it fleetingly appeared as if United Russia – the Kremlin’s party of power, which has won every nationwide election it has ever entered – might be in for a tough time.

But when, after a mysterious 14-hour delay, the two million votes cast as part of an online voting trial scheme were added to those cast at traditional polling stations, the above results were turned upside down.

The trial, conducted only in Moscow and a handful of other regions, saw the capital return a clean sweep of pro-Kremlin candidates – even as United Russia continued to lose ground in traditionally pro-Putin areas of the country. Nationwide, the ruling party, which had been polling at under 30 per cent for months, wound up with half of all votes cast and a two-thirds parliamentary supermajority.

“I know that this result is impossible,” wrote Mikhail Lobanov, a Moscow State University maths professor and Communist Party candidate of his opposition-inclined district’s final tally. He had posted a large initial lead over state TV presenter Yevgeny Popov, but that melted away once the e-voting results turned the tables. “Electronic voting gave Popov a fake 20,000 margin.”

It had been a muted campaign. The Kremlin, confident in its ability to get loyalist constituencies like pensioners and state sector workers to the polls, seemed at times to be actively discouraging anyone else from taking an interest in the election. On state TV, debates aired at 7.35am, and in-person campaigning vanished amid Covid restrictions. And with polls showing political apathy at a 17-year high on the eve of election day, the strategy seemed to have worked.

Meanwhile, the opposition was in little condition to put up a fight, broken as it is by the repression and arrests that followed the winter protests against Navalny’s jailing, and disoriented by an unprecedented assault on independent media and civil society organisations – the bulk of which are now designated “foreign agents”. Even before Google and Apple wiped Navalny’s smart voting app from their platforms under threat of criminal prosecution, the utter failure of the Navalny protests sent anti-Kremlin Russians into a “state of political depression”, political analyst Tatiana Stanovaya told me.

A few nights before polls opened, I witnessed this depression for myself at a rally for the leading opposition candidate in Moscow’s wealthy, anti-Kremlin centre. At the event, held in a quiet park just off the New Arbat shopping thoroughfare, both campaign staffers and empty chairs outnumbered actual voters, of whom there were no more than ten. The candidate – a burly, weather-beaten veteran of the Yeltsin-era Duma who would go on to receive an endorsement from Navalny – insisted on addressing the intimate gathering using a loudhailer. “I’m using this thing,” he said at one point, averting his eyes sheepishly, “just in case someone hears and decides to come over…

Back to Top
Close
X
After Afghans fell from plane, families live with horror…NewswireYahooBy Kathy GannonKABUL, Afghanistan (AP) — It’s a scene that has come to symbolize the chaotic end to America’s 20 years of war in Afghanistan: A l…

Depression without protest: the aftermath of Russia’s 2021 election

X
Afghanistan girls soccer team given asylum in Portugal…NewswireYahooThe girls on Afghanistan’s national soccer team were anxious. All dream of growing up to be professional soccer players. Then the message finally…