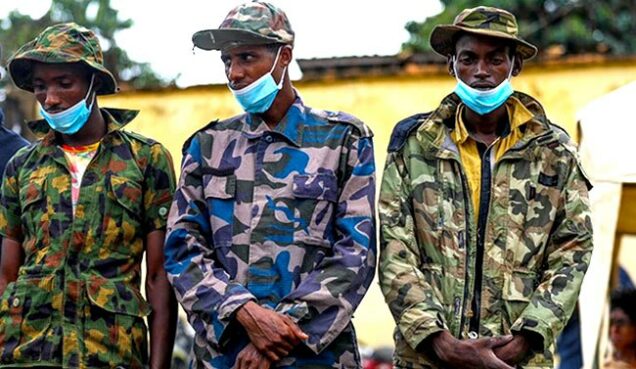 They were paraded along with 47 other notorious criminals and kidnappers in Abuja on Thursday.

Force Public Relations Officer, CP Frank Mba said notable among the cases was the arrest of three of the key suspects involved in the abduction of students of Bethel Baptist High School, Maraban Damishi, Kaduna, by operatives of the Special Tactical Squad (STS).

The suspects are: Ishaku Lawal, Muazu Abubakar and Adam Bello.

He said investigations by the Police team revealed how Muazu Abubakar a.k.a Datti, 27, the principal suspect, carried out surveillance of the Bethel school and strategized with his other gang members before they attacked and abducted the students.

“Ishaku Lawal who was also arrested in connection with the incident, revealed how Ahmadu a.k.a Yellow provided the firearms and ammunition they used for the operation.

“One AK-47 rifle was recovered from each of the suspects. Investigations into the case is still ongoing,” Mba said.

Back to Top
Close
X
Policeman killed in clash between Police team, Okada riders in Lagos…In the NewsTVC News Unconfirmed reports say there was a fracas between Policemen and Okada riders at Ajao Estate area of Lagos State earlier today. The Fracas ac…