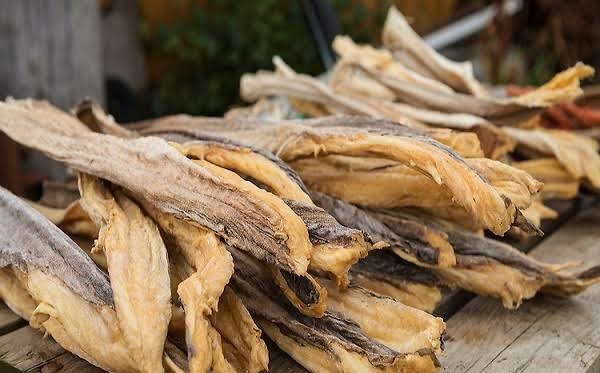 The Norwegian ambassador said on Thursday that the ban on forex had resulted in inflated cost of stockfish in Nigeria.

Stockfish, a popular delicacy in southern Nigeria, is costly due to ban on Forex for its importation, says, Knut Lein, Norway Ambassador to Nigeria.

The Central Bank of Nigeria (CBN) in 2015 listed pelagic fish and stockfish among 44 items not valid for Foreign Exchange Window.

“In the end, those suffering are the Nigerian consumers of stockfish who buy the item at a higher price than they should have,” Mr Lein bemoaned.

The Norwegian ambassador told NAN on the sideline of a two-day seafood seminar in Port Harcourt on Thursday that the ban had resulted in inflated cost of stockfish in Nigeria.

According to him, Nigeria should reconsider its forex denial on stockfish imports as the seafood is highly nutritional and has become a part of the local delicacy.

“Norway is not competing with Nigeria in stockfish production and we have raised two points to this argument with Nigerian government officials.

“One is that Norway understands that Nigeria needs to grow its own fish industry, to which Norway stands ready to assist Nigeria.

“But today’s topic is about stockfish, a very particular product which is enjoyed a lot in Nigeria and that cannot be produced here due to climate.

“So, our argument is that we want to work with the Federal Government to grow our trade and at the same time, provide assistance for the Nigerian fish industry to grow,” he said.

The envoy said that both countries had to work closely to ensure mutually beneficial relations.

“So, we are waiting on the Nigerian authorities to demand our assistance as well as remove barriers on the stockfish trade in the country.

“The lack of access to forex and challenges in issuing letters of credit has resulted in both importers and exporters losing a lot from the trade, blamed on the expensive forex in Nigeria,” he said.

Lein blamed the trade imbalance between both countries to Nigeria’s importation of refined petroleum products from Norway, after exporting crude oil to the country.

In his address of welcome, Trond Kostveit, Director of Africa, Norwegian Seafood Council said the council organised the programme to exchange ideas with local industry players.

Mr Kostveit said that residents of Port Harcourt were among the highest consumers of stockfish in the country, hence the decision to partner with importers and exporters in Rivers.

“We want to make sure that the fish comes very quickly to consumers in the city in the face of general concerns over the high price of stockfish.

“Stockfish is not a luxury product but an important nutritional food source for everyone,” he added.

Speaking, the Deputy Governor of Rivers, Dr Ipalibo Banigo said the state government was ready to partner with the Norwegian Seafood Council to develop the state’s seafood industry.

She said the state, blessed…

Back to Top
Close
X
Nigerian-British MP dragged for “crass, divisive” WhatsApp messages leaked by another Nigerian…In the NewsNigeria AbroadKemi Badenoch, Nigerian-British Member of Parliament (MP) recently appointed Equalities Minister was at the centre of a colonialism row …

X
Policeman killed in clash between Police team, Okada riders in Lagos…In the NewsTVC News Unconfirmed reports say there was a fracas between Policemen and Okada riders at Ajao Estate area of Lagos State earlier today. The Fracas ac…