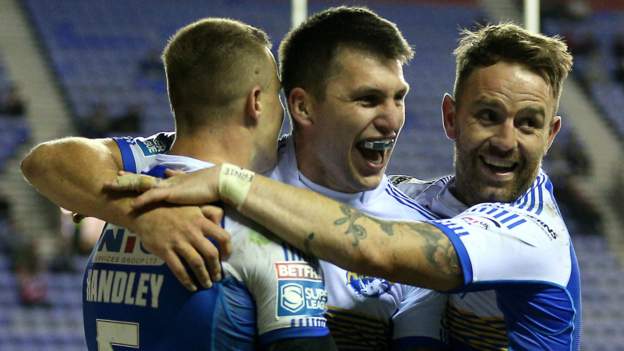 Leeds Rhinos overcame Wigan Warriors to book a Super League play-off semi-final spot in a bruising, intense game away at the DW Stadium.

The two sides slugged it out for the first 40 minutes without a single point to show in a game of ferocious grind.

It took a kick from Kruise Leeming, tapped back by Richie Myler and finished by Ash Handley, to break the arm-wrestle cycle in the second half.

Wigan hammered away but Rhyse Martin sealed victory with a late penalty.

That decision – and the game-sealing shot at goal – infuriated outgoing Wigan head coach Adrian Lam, who felt it had been spilled by Mikolaj Oledzki rather than ripped away from the Rhinos prop.

Leeds will face either League Leaders’ Shield winners Catalans Dragons or St Helens in the last four, depending on the winner of Friday’s game between Warrington and Hull KR.

Back to Top
Close
X
Martial disappoints again: Is he running out of chances at Manchester United?…SoccerThe Frenchman underwhelmed in the Carabao Cup defeat to West Ham By PANOS KOSTOPOULOS Back on September 4, Ukraine were hosting France and Anthony Mar…