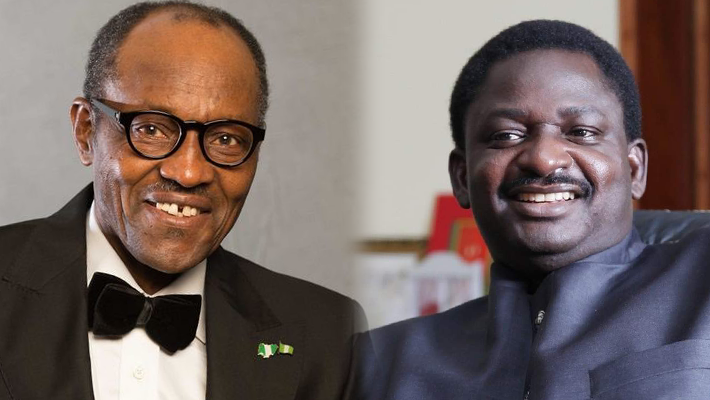 resident Muhammadu Buhari’s media aide Femi Adesina has hailed his principal’s “divine attribute” as similar to God’s ways of doing things, saying Nigerians should like and “covet” him with love and praises.

Mr Adesina on his Facebook page Thursday night said Mr Buhari embraced controversial politician Femi Fani-Kayode and accepted him in the ruling APC despite Mr Fani-Kayode’s years of frequent curses and insults directed at the president.

“This President has a capacity to forgive, and forget. And make peace,” Mr Adesina said in the post. “That was what he displayed in the case of FFK. Nothing short of divine attribute, which me and you should covet and seek to approximate.”

“He showed him mercy, dropping like gentle rain from heaven, when he could have otherwise spat into the sky, collecting the spittle with his own face. Was that not what me and you would have done? Confess.
“We would have told FFK to go to hell, and stay there. But Buhari didn’t. He displayed an attribute of God: forgiveness.

One of the lies that had been serially told against the President was his alleged unforgiving spirit, a falsehood sold to Nigerians by anti-Buhari forces since the days of military rule.

“The lie travelled for so long, till it was eventually overtaken by the truth in one day. Nigerians saw through the facade, and elected Buhari as President in 2015. Re-elected him with wider margin in 2019,” Mr Adesina said.

Mr Fani-Kayode joined the APC on September 16, after publicly asserting himself as the most vocal and vicious critic of the Nigerian leader. He abandoned the crisis-ridden opposition Peoples Democratic Party, where he was aviation minister in the 2000s and presidential election spokesman in 2015.

Before Mr Fani-Kayode met with the president for a photo opportunity and formal declaration of his membership of the ruling party, Messrs Adesina and Fani-Kayode repeatedly sparred over criticism of the direction Mr Buhari was leading Nigeria.

Back to Top
Close
X
Despite evidence in handbook,NYSC denies express advice for corpers to prepare ransom when using hig…Latest NewsPunch Kayode Oyero 24 September 2021 In what appears to be a tardy disposition to the review of official documents, the management of the National You…