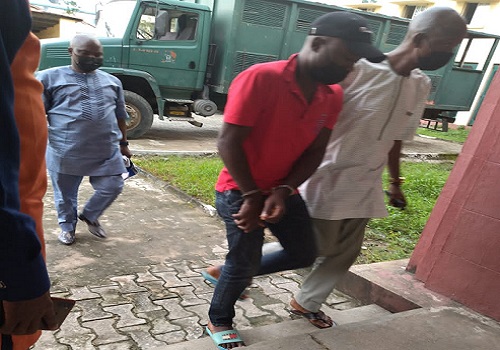 A Yaba Chief Magistrate’s Court has remanded a dismissed Police Sergeant, Mr Samuel Philips in prison custody over the alleged murder of a teenager at her home in Surulere, Lagos.

Chief Magistrate Adeola Adedayo ruled that the order stands pending legal advice on the case from the office of the Director of Public Prosecution (DPP).

The 30-year-old ex-Cop, whose residential address was not given, was brought before the court on a temporary one-count charge of murder preferred against him by the Police

He said the incident occurred at about 11:30pm at No. 5, Mogaji Street, Ijeshatedo, Surulere, Lagos.

Nwabuisi said: “Philips whilst in a criminal raid operation unlawfully released gunshot into the house/ dwelling of one Monsurat Ojuade, aged 18 years, hitting her two thighs, which led to her death”.

According to him, the offence contravened Section 223 of the Criminal Law of Lagos State, 2015.

Chief Magistrate Adedayo, in accordance with the procedure, did not take Phillips’ plea.

Rather, she remanded the defendant pending legal advice from the (DPP.)

The case was adjourned till October 25, for DPP’s advice.

Meanwhile, Police Public Relations Officer, Lagos State Command, Adekunle Ajisebutu, in a statement earlier confirmed that the alleged killer cop had been dismissed from the Force.

Ajisebutu, a Chief Superintendent of Police (CSP), said: “This is to inform the general public that Sgt Samuel Philips who was tried for the shooting incident of 11th September 2021 that led to the death of Monsurat Ojuade has been dismissed from the Nigeria Police Force.

“Philips was dismissed after being tried for the shooting incident of September 11, 2021, that led to the death of Monsurat Ojuade has been dismissed from the Nigeria Police Force.

He explained that Phillips was dismissed after the conclusion of his orderly room trial.

“Recall that the Lagos State Commissioner of Police, Hakeem Odumosu, had promised that the matter would be properly investigated and that justice would be served. This action is, therefore, done in fulfilment of that promise.

“The Commissioner of Police further sympathises with the bereaved family, and reiterates his earlier promise that justice would be done in this case,” Ajisebutu said.

Back to Top
Close
X
Abia Poly shuts down as Ikpeazu condemns shooting of protesting students…In the NewsDaily PostThe Management of Abia State Polytechnic Aba, has directed the students to proceed on a one-week temporary break from today 24th day of Sept…