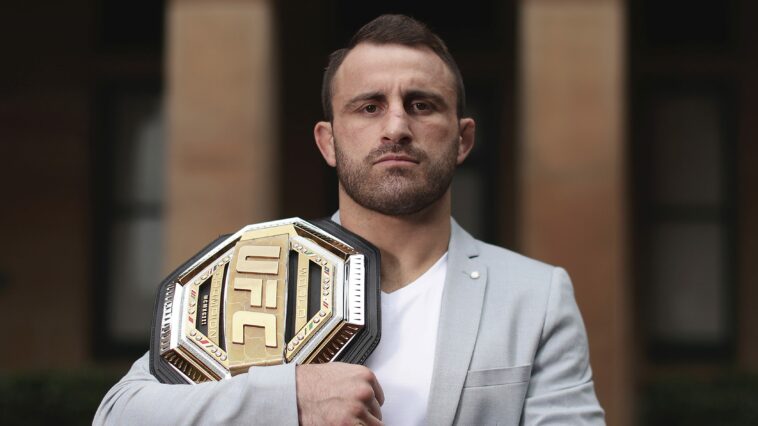 Some people are born to fight. At least that’s how things seem whenever someone like UFC featherweight champion Alex Volkanovski bursts onto the scene. Volkanovski is already one of the most dominant champions in the world, but he could also be on his way to doing even bigger and better things in the sport.

Volkanovksi, 32, from Australia, defends his 145-pound title against dangerous contender Brian “T-City” Ortega, 30, from the U.S., in the main event of UFC 266 on September 25.

Volkanovski enters the contest ranked only behind Jon Jones, Kamaru Usman, and Israel Adesanya on the UFC’s official pound-for-pound list. Moreover, there’s a solid argument to be made on his behalf that the UFC’s panel is placing him too low on the list.

After all, Jones hasn’t competed since February 2020, and Adesanya recently lost to UFC light heavyweight champion Jan Blachowicz at UFC 259 in March.

Meanwhile, Volkanovski is undefeated in the UFC. He’s probably underrated, too.

A victory over Ortega at UFC 266 this weekend would make it 10 wins in a row for the champ in the UFC, so a dominant performance might help elevate Volkanovski closer to where he belongs in the hearts and minds of the MMA community.

Volkanovski is one of the best fighters in the sport, and it’s something that seems to have come naturally to him….

Back to Top
Close
X
Ronaldo drives new £164k Bentley to Man Utd training…SportsCristiano Ronaldo who is currently rated by Forbes magazine as the richest footballer was snapped by UK’s Mirror driving a new £164,000 luxury Bentley…