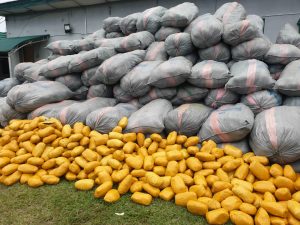 The Nigerian Customs Service, NCS, Western Marine Command, says it intercepted 232 sacks of marijuana worth N1.1bn between July and September, this year.

According to Mr Ochiba, the coastal and harbour patrol officers, together with the Comptroller’s Surveillance and Monitoring team, while on patrol along Kuramo Beach accosted and intercepted the 232 sacks suspected to be Cannabis Sativa, popularly known as ‘Marijuana.

He said no arrest was, however, made as the smugglers dived into the sea on sighting the patrol team.

Mr Ochiba added that while on stop and search operations along the waterways at Pashi, in the Yekeme axis, the operatives of the Command discovered some powdery substances suspected to be heroin concealed in a carton of Indomie noodles weighing 1.52Kg and valued N40, 860,841.02.

X
UNGA: Amidst mounting loan requests, Buhari seeks debt cancellation for Nigeria,…In the NewsPremium TimesDespite criticism back in Nigeria over his numerous loan requests in the past few years, President Muhammadu Buhari on Friday appealed to…