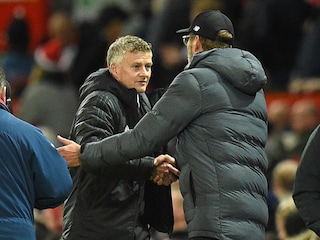 Ole Gunnar Solskjaer claims Manchester United are being given less penalties since Liverpool manager Jurgen Klopp questioned the number of spot-kicks awarded to the Old Trafford outfit. Solskjaer was furious after Cristiano Ronaldo was denied two strong appeals for a spot-kick in a 2-1 win at West Ham in the Premier League last weekend. The Hammers got their revenge by knocking United out of the League Cup on Wednesday with a 1-0 victory, but Solskjaer’s men again felt hard done by when Jesse Lingard was not awarded a penalty.

Back in January, Klopp erroneously claimed United had been awarded more penalties in Solskjaer’s two-and-a-half years in charge than his first five years at Anfield.

“We just have to hope that we get what we deserve. We should have had three pens in the last two games,” Solskjaer said on Friday.

“I don’t know, but there was a certain manager last year who was starting to worry about us getting penalties and after that it seems like the decisions are more difficult to give. I’ve seen a big, big difference since then on.

“But we just have to leave it up to the refs and hope that they will make the right calls very soon.”

With another opportunity for Solskjaer to end his wait to win a trophy as United boss having slipped by, there is even more pressure on United to challenge for the Premier League this season.

United sit level on points with leaders Chelsea and Liverpool with 13 points from their opening five games, thanks in part to Ronaldo’s flying start since returning to Old Trafford…