Cristiano Ronaldo who is currently rated by Forbes magazine as the richest footballer was snapped by UK’s Mirror driving a new £164,000 luxury Bentley to Manchester United’s training ground the morning after his side crashed out of the Carabao Cup.

West Ham secured a 1-0 win over Mancchester United at Old Trafford, exacting revenge on the Red Devils following the 2-1 defeat at the London Stadium just days prior.

Ronaldo, who didn’t play in the game, could be seen in the crowds growing visibly frustrated as United squandered their chances.

The star could only watch on as his team struggled to draw equal before crashing out of the Carabao Cup in the third round.

Of United’s 27 shots, they only managed to get six on target, with both West Ham centre-backs putting in impressive performances.

After the cup clash loss, Ronaldo could be seen arriving at Carrington in his £164,000 supercar. 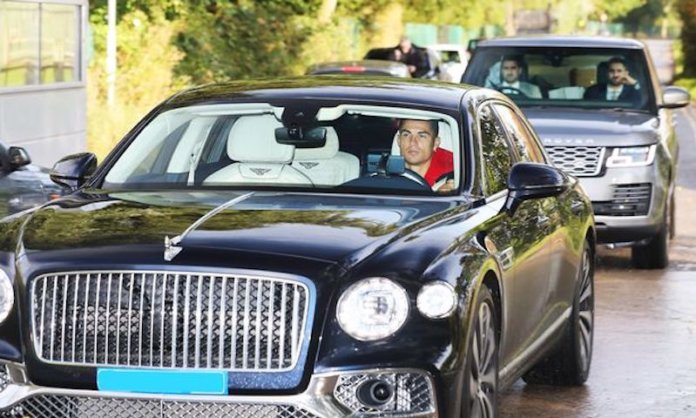 The Bentley Flying Spur is the “pinnacle of Bentley luxury” and only one of a number of supercars the Portuguese forward owns.

According to UK’s The Sun, Ronaldo ensured that any property he moved into had ample space for his fleet of luxury cars, with a total value of £17million.

Despite costing five times more than the average UK salary, Ronaldo’s Bentley is cheap compared to some of his other cars.

He was also gifted a £516k Brabus G-Wagon from his girlfriend Georgina Rodriguez last year, with the Portuguese superstar posting an image of the car on his social media.

The 36-year-old has had a brilliant start to his return to Old Trafford after signing a two-year contract.

After completing his move on deadline day, he said: “I have a fantastic history with this amazing club.

“I was there at 18 years old and of course I’m so happy to be back home after 12 years. So I’m really glad and looking forward to starting my first game.

“I think it’s the best decision that I have made. It’s right on point in my opinion.

Back to Top
Close
X
Leeds win at Wigan to reach semi-finalsSoccerBBCLeeds Rhinos overcame Wigan Warriors to book a Super League play-off semi-final spot in a bruising, intense game away at the DW Stadium.The two sid…

X
Natural Born Killer: Alex Volkanovski is undefeated in UFC…SportsHeavySome people are born to fight. At least that’s how things seem whenever someone like UFC featherweight champion Alex Volkanovski bursts onto the …