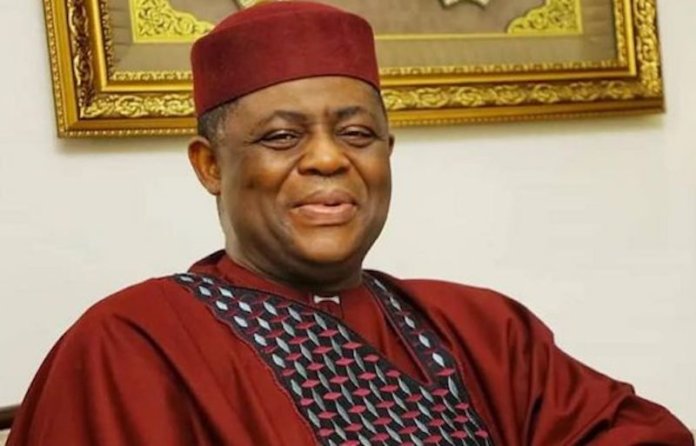 Femi Fani-Kayode is the latest butt of jokes in several circles. Many would say he brought this onto his own head. After verbally decimating the All Progressives Congress and President Muhammadu Buhari for about seven years, he eventually abandoned the Peoples Democratic Party for the APC he had vilified last week. Indeed, it was a surprise as no one saw it coming even though he had been hobnobbing with the leading lights of the ruling party for months, denying however, that he had the intention to do what Nigerian politicians do, decamp.

“The suggestion that I joined the APC is false and insulting. Those that are peddling this fake news should bury their heads in shame. With what we have witnessed I would rather die than join a filthy, rat-infested sinking ship like the Almajiri Peoples Congress (APC),” he said last December, and vowed: “I am committed to opposing the APC and those that are in their ranks for the rest of my natural life and I will NEVER join them no matter what! They are nothing but darkness whilst I stand for the light of God and truth: there can be NO fellowship between light and darkness.”

But last week Thursday, he took back all those words. Led by Mai Mala Buni, the Chairman of the APC’s Caretaker and National Convention Planning Committee, who is also the governor of Yobe State, Fani-Kayode was seen at the Presidential Villa, Abuja early in the morning. Moments after, a picture of him along with the president and the acting party chairman filled the media space. “The newest entrant into the APC,” was the caption the presidency that pushed it out, perhaps sarcastically, gave it.

Expectedly, the social media went burst, lashing out at Fani-Kayode for eating his own vomit. Memorable quotes of his past denials and harsh critique of the APC and Buhari were attached to their searing attacks on him. Some of the critics even went personal, saying Femi was a true son of his father, Remilekun “Fani-Power,” an astute First Republic politician, who moved around the leading political parties of the time also. One of the aggrieved persons was Babafemi Ojudu, the political adviser to Buhari, who described that day as the saddest of his entire political career. It ought not to be though.

But a deft politician that he is, Fani-Kayode had already anticipated this and had sought to douse the impending attacks. “The point is that I felt it was time to do the right thing, to put Nigeria first and appreciate the efforts that have been made, particularly in the last couple of years in terms of security; fighting insurgency and terrorism,” he had told State House correspondents who had ambushed him as he came out of the room where he met with the president, his erstwhile foe. “It is not always negative and when the time is right, we change direction to join forces and join hands to move the country forward,” he explained to the reporters who must have been flabbergasted by the unusual soothing words coming from his mouth. “Doing this doesn’t mean we are enemies to anybody. Even if we are in another party, the PDP or any other party or group, we can still work together across party, regional, ethnic or religious lines,” Fani-Kayode concluded.

Despite his explanations, he has continued to receive attacks from everywhere, including members of his new party like Joe Igbokwe, the Anambra-born Lagos APC chieftain who described Fani-Kayode on ARISE TV last Thursday as lacking in political character.

While the public’s angst might be understood and passed off as genuine, the diatribe of his fellow politicians like Ojudu and Igbokwe are at best self-serving and hypocritical, most probably a push back at a potential threat to their own political interest.

Actually, Fani-Kayode’s latest move ought not surprise any perceptive observer of the emerging political realignment in the country. As the country inches closer to the 2023 general election politicians are positioning themselves for a better deal. Although all of them claim to do what they are doing in the interest of the people, it is a well-known fact that they all act in their own self-interest. Otherwise, what are South-eastern politicians like Ken Nnamani and Dave Umahi doing in the APC? Nnamani had been president of the Senate and held commanding public service positions during the 16-year rule of the PDP. Umahi was a deputy governor for eight years and governor for five years on the platform of the same PDP. So, it might be asked, what public service interest do they want to serve in the APC that they did not have the opportunity to accomplish in the PDP?

Fact of the matter is that they have gone to position themselves for a possible bid for a presumed presidential allotment that might come the way of the South-east in the ruling APC. Yet, other regional politicians are also positioning and making deft strategic moves. Fani-Kayode’s move ought to be seen within this context. And if the internal opposition to his admission into the party is viewed critically, it would be seen that it comes from a political flank that probably feels that he has been brought in by a contending tendency to checkmate its strategic plan for 2023. Whatever it is, Fani-Kayode has obviously exercised his constitutional right of association and there was nothing his adversaries could have done about it as to block him or to continue to overtly harass him would in itself amount to an affront on the constitutional provision that grants every Nigerian the rights of speech, movement and association.

However, a pattern is emerging that founding members of the APC appear not to have taken note of, or that they have noted but do not know how to respond to. Since 2019 top PDP politicians have been regrouping in the APC. This may well be a strategic plan to regain power using the incumbency of the ruling party. For those who know the ways of the PDP, a direct confrontation between its erstwhile chieftains and their APC counterparts is likely to leave the latter worsted given the astuteness of the former in conspiratorial politics. That confrontation is imminent. It will begin with the impending national convention. And when that happens Fani-Kayode would most certainly be in a familiar terrain and in his best element.

Back to Top
Close
X
The determinant of effective leadershipOpinionThe GuardianBy Timi OlubiyiIn Nigeria and beyond a trending movie this time is the King of boys 2 (The return of the King). It is a seven-part series …

X
When N500 gift made an old woman cryOpinionPunchBy Fola OjoIn the last 20 of my over 30 years of sojourn in the United States, I’ve always made it a duty of sort to visit my hometown of Imesi-I…