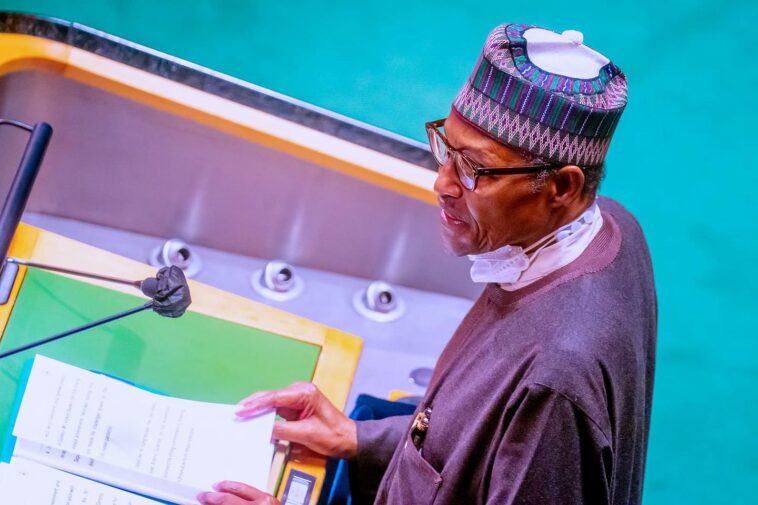 Despite criticism back in Nigeria over his numerous loan requests in the past few years, President Muhammadu Buhari on Friday appealed to ”rich nations” and international financial institutions for outright debt cancellation for countries ”facing the most severe challenges in the wake of the COVID-19”.

He made the appeal during his speech at the 76th Session of the UN General Assembly in New York.

The president’s plea comes amid criticisms from Nigerians over his administration’s consistent borrowings.

His most recent request for an external loan was sent to the Senate on September 14.

In his letter, the president sought the lawmakers’ approval to borrow $4 billion and €710 million loan from bilateral and multilateral organisations to fund the deficit in the 2021 budget.

He had said the loan request, an addendum to the 2018-2020 borrowing plan, is needed for some “critical projects.” He also asked the lawmakers to approve grant components of $125 million.

The request came barely two months after the National Assembly approved his earlier request to borrow $8.3 billion and €490 million loans contained in the initial 2018-2020 borrowing plan.

It triggered outrage from the opposition party, PDP.

While the party cautioned the NASS against approving the request, saying it could set the country’s debt profile skyrocketing without a feasible repayment plan, the APC said the loans are for “the good of the country” and well-being of the citizenry.

PREMIUM TIMES reported how Borno senator, Ali Ndume, who belongs to the ruling APC, also faulted the president’s borrowing plan describing it as ”increasing and worrisome”.

The president’s handlers have always argued that the government is only borrowing for capital projects and not for consumption as done by past governments.

But, developing countries, Mr Buhari said, have been faced with unsustainable debt burdens even before the pandemic.

‘‘The COVID-19 pandemic has increased the risk of a new wave of deepening debt, where vital public financial resources are allocated to external debt servicing and repayments, at the expense of domestic health and financing for critical developmental needs.