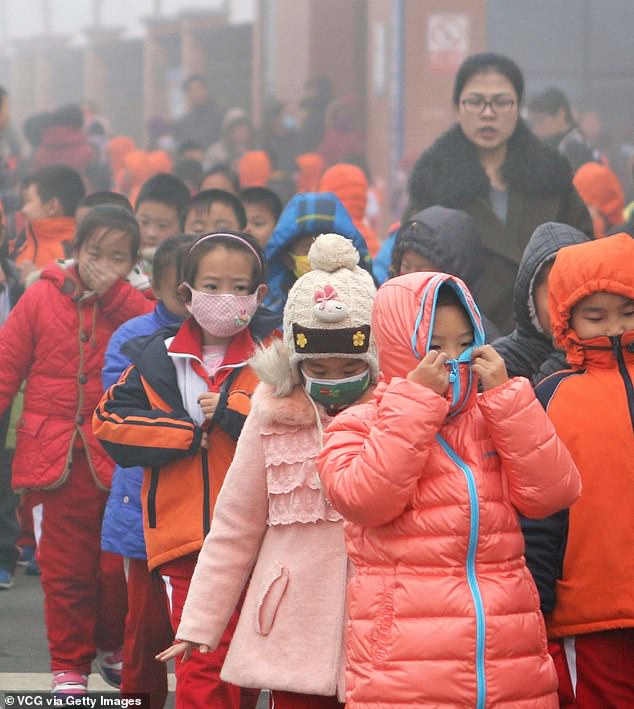 The billowing clouds of steam and smoke are visible from miles away. As night falls and the lights turn the sky neon bright as far as the eye can see, the chimneys keep remorselessly pumping out their toxic fumes.

This is the Ningdong Energy and Chemical Industry Base, one of the biggest industrial complexes in the world.

Sprawling in semi-desert far to the west of Beijing, it covers an area so vast — 341 square miles, more than two thirds the size of Los Angeles — it is almost unimaginable.

Much of The Base, as it is known locally, is home to mines, which produce 130 million metric tonnes of coal a year — about the same as the annual total dug from all 233 deep mines still in use in Britain when coal was our biggest energy source in the 1970s.

The coal — the most polluting of all fossil fuels — is fed into an array of huge power stations at the complex, which have the capacity to generate 17.3 gigawatts. That would be enough to satisfy a third of the UK’s peak demand for electricity.

Also to be found at The Base are 32 companies that use coal to make chemicals, so generating still more carbon pollution.

And on top of all this is the showpiece: the world’s largest coal-to-liquid (CTL) plant, run by the state-owned Shenhua Ningxia Coal Industry Group.

Simply burning coal is dirty enough, producing more carbon dioxide than any other method of generating electricity — almost twice as much as burning natural gas. But making oil from coal is far worse: it can double the amount of CO2 pumped into the atmosphere from every unit of energy.

Yet China’s Shenhua group — now restructured as part of China Energy — has been investing heavily in this hugely polluting CTL plant.

No Western journalist has ever been allowed to visit the site. But in 2017 a Chinese researcher, Xing Zhang, was given a tour by the firm’s vice chairman, Dr Yao Min.

And The Base is not China’s only large CTL plant. There are at least six others in the country that are already built or under construction — and China says it plans to build still more in nations where it has lavished investment, such as Pakistan.

Yet The Base accounts for just a fraction of China’s coal dependency. Its coal power station fleet grew five-fold between 2000 and 2020, and now accounts for almost half the world’s consumption — more than three times its closest rival, the U.S. It is said to have 1,080 separate plants with a total capacity last year of 1,005 gigawatts — and is building more.

Britain, in contrast, has just four coal-fuelled plants left, with a joint output of 5.4 gigawatts. This week, in his apocalyptic climate change speech to the United Nations, Boris Johnson urged China — by far the world’s worst emitter of greenhouse gases, producing as much as 28 per cent of the global total — to end its domestic use of coal.

Mr Johnson is only too aware that if Cop26, the UN climate conference to be held in Glasgow in November, is not to be regarded as a dismal failure, China must be persuaded to make meaningful cuts in CO2 emissions.

But far from carbon emissions slowing down in China, they are increasing ever more rapidly.

This is a country with a mind-boggling pace of development. Between 2011 and 2013, China used more cement than the U.S. did in the entire 20th century. It produces almost 60 per cent of the world’s steel and its oil refinery capacity has tripled since 2000.

Even though it promised last week to stop building coal power stations abroad, China continues to do just that at home. Last year, its coal-powered capacity rose by 38 gigawatts, while the rest of the world cut capacity by 17 gigawatts.

Back to Top
Close
X
BOMBS AWAY ‘China must hit US with nuke attack before they strike if Biden defends Taiwan̵…Rifs  The Sun CHINA must make the first nuclear strike against the US if Joe Biden continues to defend Taiwan, a top Chinese diplomat says. Beijing's…