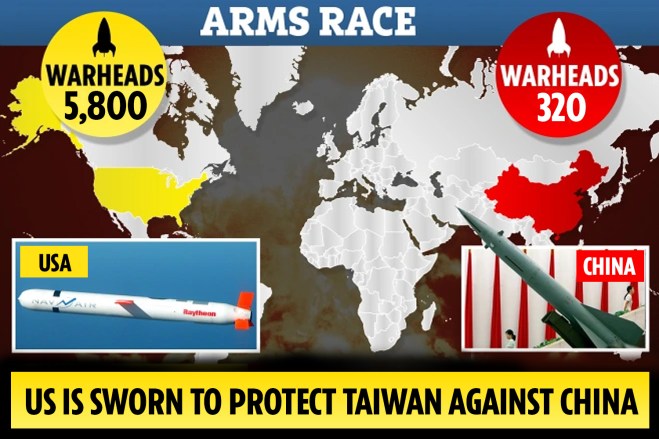 CHINA must make the first nuclear strike against the US if Joe Biden continues to defend Taiwan, a top Chinese diplomat says.

Beijing’s former ambassador to the UN, Sha Zukang said the country’s long-standing promise to only use nukes in retaliation should be re-examined in response to the new alliances forming in the region.

He said: “The unconditional no first use is not suitable . . . unless China-US negotiations agree that neither side would use [nuclear weapons] first, or the US will no longer take any passive measures to undermine the effectiveness of China’s strategic forces.

“The strategic pressure on China is intensifying as (the US) has built new military alliances and as it increases its military presence in our neighbourhood.”

The threat came ahead of a meeting between the US, India, Japan and Australia – dubbed the Quad, in Washington, host by Joe Biden.

During a meeting of the China Arms Control and Disarmament Association in Beijing last week he said: “The policy not to be the first to use nuclear weapons unconditionally has given China the moral high ground internationally.

“But for some time in the future, the US will see China as its main competitor and even its enemy. Can this policy be re- examined and fine-tuned?”

China became a nuclear power in 1964 and adopted the policy four years later.

The country is constructing nearly 300 new nuclear missile silos, while it is thought to possess around 320 nuclear warheads, report the Times.

Additionally, the comments follow the announcement of the Aukus alliance, which has angered China despite the countries leaders did not mention the country’s imposing power – but hinted at their intentions behind the move by discussing “democracy, freedom of navigation, and security.”

Biden said: “We’ll stand up for our allies and our friends and oppose attempts by stronger countries to dominate weaker ones, whether through changes to territory by force, economic coercion, technical exploitation or disinformation.

Meanwhile, tensions have been mounting with China sending fighter jets to Taiwan after the self-governing island announced its intention to join an 11-nation Pacific trade group that Beijing has also applied to join.

“The Chinese Communists have continued to invest heavily in national defence budgets, its military strength has grown rapidly, and it has frequently dispatched aircraft and ships to invade and harass our seas and airspace,” Taiwan’s Defence Ministry said.

“In the face of severe threats from the enemy, the nation’s military is actively engaged in military building and preparation work, and it is urgent to obtain mature and rapid mass production weapons and equipment in a short period of time.”

Deputy Defence Minister Wang Shin-lung said the new arms would all be made domestically – although the United States will probably remain important parts and technology provider.

Taiwan has been keen to demonstrate it can defend itself, especially amid questions about whether the United States would come to its aid if China attacked.

The weapons Taiwan aims to buy include cruise missiles and warships, the ministry said.

Taiwan has already unveiled a class of highly agile stealth warships, which it refers to as an “aircraft carrier killer”, and it’s also developing its own submarines.

Back to Top
Close
X
Haunted by the law, abandoned by families: Underground lives of Nigerian homosexual men, lesbians, o…Rifs  Punch Godfrey George takes a journey into the lives of members of the lesbian, gay, bisexual, transgender and queer community in Nigeria If any…

X
Beijing’s dirtiest secret: With 1,000 coal-fired power stations (and climb…Rifs  Daily Mail The billowing clouds of steam and smoke are visible from miles away. As night falls and the lights turn the sky neon bright as far a…