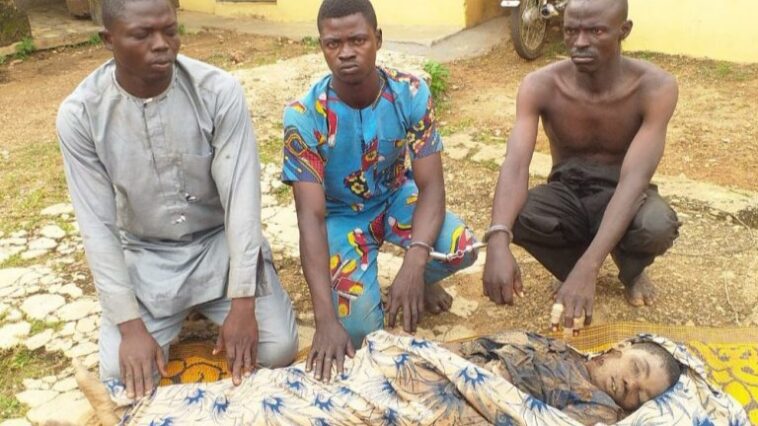 The Kwara State Command of the Nigeria Security and Civil Defence Corps (NSCDC), has arrested one lsmail Saliu, 25, for allegedly conspiring with a herbalist and one other, to slaughter his brother.

The NSCDC Command Spokesman in Kwara, Mr Babawale Afolabi, disclosed this in a statement on Saturday, in Ilorin.

Afolabi said that Saliu conspired with two others, and killed his 14-year-old younger brother, Azeez Saliu, with the intention of using him for money rituals.

The Spokesman said that the incident happened on Sept. 13, in Kosubosu, Baruten Local Government Area (LGA), of Kwara.

“On Sept. 13, operatives of the NSCDC in Kosubosu Divisional Office, got a distress call from a neighbourhood about suspicious movement of certain individuals in the area.

“Some officers from the divisional office, with operatives of the Anti-Vandal patrol team in the area, swung into action and subsequently arrested a herbalist Ahmed Nkwe 44, lsmail Saliu 25 and Saliu Ahmed 30,” Afolabi said.

The spokesman said that investigations revealed, that the suspects lured the victim to the farm, where he was gruesomely murdered by his own brother, lsmail Saliu.

He said that the suspect and his accomplices, were later arrested by operatives of the NSCDC on their way back from the farm.

Afolabi said that the prime suspect and brother to the deceased, confessed to have personally slaughtered his brother with the help of the herbalist and one other person…

Back to Top
Close
X
Fear Of Attack Forces Banks, Shops To Close In Ogun…In the NewsHeadlines – Channels Television A map of Ogun, a state in southwest Nigeria. The fear of an imminent attack has forced banks and shops to shut down in…

Man arrested for allegedly killing his brother for rituals in Kwara

X
Gov. Makinde celebrates former Gov. of Oyo state, Ladoja, at 77…In the NewsTVC News Oyo State Governor, Seyi Makinde, has described a former Governor of the state Rashidi Ladoja as an exemplar in traditional and political lea…