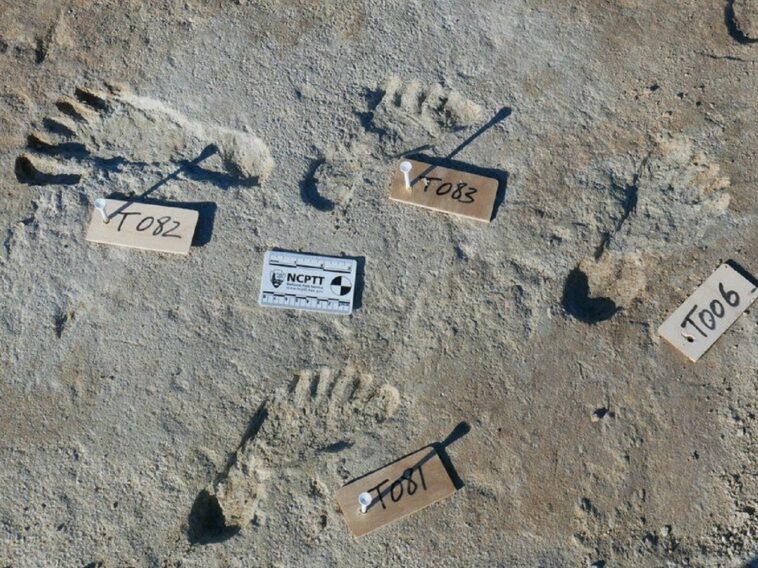 Found in New Mexico, the fossilized impressions date to between 21,000 and 23,000 years ago, a new study suggests

An analysis of fossilized footprints at White Sands National Monument in New Mexico offers what some scientists say is the most conclusive evidence yet that humans lived in North America long before the end of the last Ice Age. The research, published in the journal Science, dates the prints to between 21,000 and 23,000 years ago.

“We’d been suspicious of the age for a while, and so now [that] we finally have that it’s really exciting,” study co-author David Bustos, chief of natural and cultural resources at White Sands, tells NBC News’s Tom Metcalfe. “One of the neat things is that you can see mammoth prints in the layers a meter or so above the human footprints, so that just helps to confirm the whole story.”

Scholars have long been aware of the tracks, which are known as “ghost prints” because they are only visible under particular weather conditions. But the new study is the first to clearly date them to such an early era. The researchers determined when the footprints were made through radiocarbon dating of dried ditchgrass seeds found in layers both above and below the impressions.

“The evidence is very convincing and extremely exciting,” Tom Higham, an archaeologist at the University of Vienna who was not involved in the study, tells Nature’s Ewen Callaway. “I am convinced that these footprints genuinely are of the age claimed.”

Many archaeologists have placed the start of human life in the Americas toward the end of the last Ice Age, around 13,000 years ago, reports Carl Zimmer for the New York Times. That’s when some of the oldest known tools, made by the Clovis culture in what is now New Mexico, appear. Melting of ice sheets as the world warmed could have allowed hunter-gatherers to cross a land bridge from Siberia to Alaska.

Since the 1970s, other archaeological work has suggested that humans arrived on the continent earlier, perhaps between 16,000 and 17,000 years ago, traveling down Pacific Coast routes that became passable while the continent’s interior was still icy, writes Maya Wei-Haas for National Geographic.

Some researchers have also published evidence of a much earlier human presence in North America, including stone tools dated to as long as 30,000 years ago. But others have questioned whether the discoveries were really tools shaped by humans, and whether estimates of their age are correct.

The new White Sands research is different because the prints were obviously made by people, study co-author Vance Holliday, an archaeologist and geologist at the University of Arizona, tells National Geographic.

Ciprian Ardelean, an archaeologist at Autonomous University of Zacatecas in Mexico who co-authored one of the earlier studies of ancient tools but was not involved in the new research, tells the Times that the paper provides definitive support for the idea that humans lived in North America at the height of the Ice Age.

“I think this is probably the biggest discovery about the peopling of America in a hundred years,” he says. “I don’t know what gods they prayed to, but this is a dream find.”

Not everyone is as fully convinced. Loren Davis, an archaeologist at Oregon State University, tells National Geographic that without a second dating method, the radiocarbon dating can’t be completely trusted. Aquatic plants like the ones the researchers used for dating can pick up “old” carbon from nearby materials in what’s called the freshwater reservoir effect, which gives the false impression that plant material is older than its true age.

Researchers from the UK and the US, including Bournemouth University, have uncovered unequivocal evidence, based on analysis of footprints found at White San…

But the researchers say they accounted for that issue. According to Nature, the team dated hundreds of seeds from different layers. The seeds’ radiocarbon dating fell in line with their place in the geological record, with older seeds on the bottom and younger ones on top, rather than the more random distribution expected with the reservoir effect.

Study co-author Sally Reynolds, a paleontologist at Bournemouth University, says the new findings suggest that humans coexisted with huge animals such as mammoths, giant sloths and direwolves for much longer than previously believed.

“It may well be that the humans…

Back to Top
Close
X
Scientists find a new way to reverse immune suppression in tumours – ecancer…ScienceEcancerMalignant tumours can enhance their ability to survive and spread by suppressing anti-tumour immune cells in their vicinity, but a study led by…