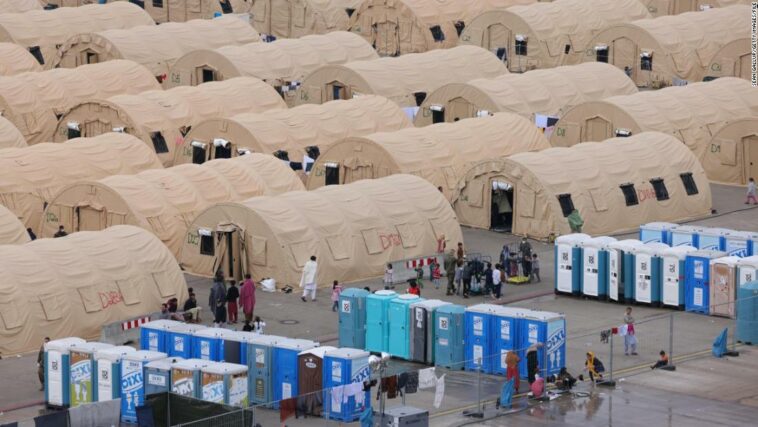 The task of accommodating 10,000 Afghan refugees, including approximately 2,000 pregnant women, is putting facilities at Ramstein airbase in Germany under tremendous strain as nighttime temperatures drop toward freezing and what was meant to be a 10-day temporary stay is stretching into weeks, with one US source familiar with the situation describing it as becoming “dire.”

Already 22 babies have been born to Afghan mothers at Ramstein, and that number will rise very soon with roughly two thirds of the 3,000 women being housed there pregnant, requiring the time and effort of medical personnel from Ramstein and other bases, two US sources familiar with the situation at the base told CNN.

Even though it’s one of the largest US bases in Europe, Ramstein was never designed to handle such a large transient population especially when there are better equipped and larger facilities in the US.

One of the sources called the Afghans at Ramstein “the forgotten 10,” as the focus has shifted away from the almost 10,000 who remain stuck in limbo in Germany towards some 53,000 Afghan evacuees already housed at eight military bases across the US.

Ramstein Air Base on Twitter: “Satellite imagery shows the before & after at #Ramstein Air Base where the @DeptofDefense, @StateDept, NGOs & partners have constructed a temporary #Humanitarian city to house and care for evacuees from #Afghanistan who are transiting through Germany. #OperationAlliesRefuge pic.twitter.com/hl9oKyJG7Q / Twitter”

Satellite imagery shows the before & after at #Ramstein Air Base where the @DeptofDefense, @StateDept, NGOs & partners have constructed a temporary #Humanitarian city to house and care for evacuees from #Afghanistan who are transiting through Germany. #OperationAlliesRefuge pic.twitter.com/hl9oKyJG7Q

Ramstein called it a “temporary humanitarian city” on social media, built to handle the surge of Afghan evacuees fleeing Kabul. The Afghan families, some with as many as 20 men, women, and children, were only supposed to be at the base for 10 days for screening and processing under an agreement with Germany, the commander of European Command, Gen. Tod Wolters, said on September 1.

Now the remaining Afghans have been in Germany for several weeks and are set to stay longer after a confirmed case of measles among the Afghan evacuee population in the US led the Centers for Disease Control and Prevention to pause the flights for 21 days. The interruption is scheduled to last until October 9, but the challenges of housing such a large population on an overseas military base have grown exponentially, the sources said.

Two-thirds of tents are currently heated

Nighttime temperatures have dipped to near freezing and are set to keep dropping, forcing the base to find generators and heaters for hundreds of tents set up on aircraft taxiways and parking spots. So far, approximately two-thirds of the tents are heated, one source said, and the rest should be within days, but it underscores the magnitude of the problem that was never supposed to be handled at Ramstein.

The base has dealt with some illnesses but is in “a good state” now, one source said. Since Afghans began arriving in late-August, there have been nine Covid cases, as well as a very small number of mumps, chicken pox, and norovirus cases, the sources said. There has also been a case of malaria.

But it was the confirmed case of measles in the US that prompted the CDC to issue guidance that flights of Afghan evacuees from Europe should be paused until the entire Afghan population could be vaccinated. The CDC then added another three-week delay after inoculation to ensure the population is fully vaccinated.

The CDC representative at Ramstein recommended moving Afghans to the United States once they had been vaccinated, but the sources said CDC headquarters overruled the representative, effectively halting the flights.

CNN has reached out to the CDC for comment.One flight did go from Ramstein to Chicago…

X
At least 3 dead, multiple injured as train with 146 passengers derails in remote…Breaking News 2Several people were killed and scores were injured after seven cars of an Amtrak train derailed in Montana, close to Canada’s border. Photos from the …