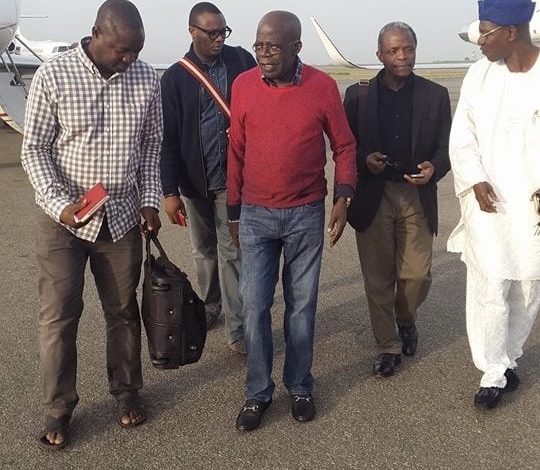 Shehu Sani has suggested that the national leader of the All Progressives Congress (APC), Bola Tinubu is back to Nigeria, from London.

Sani, a fresh member of the Peoples Democratic Party (PDP), stated this via his verified Twitter handle on Saturday.

“One of my friend bought a ticket and landed in the UK to see the Jagaban,only learn that the Jagaban is back. Best wishes to the Asiwaju,” Sani wrote.

Tinubu, 69, also commonly called ‘Jagaban’,  left the shores of Nigeria for medical treatment in London over two months ago. But while out of sight is usually out of mind for most politicians, this has not been the case for the former governor of Lagos State whose London home has become a magnet for Nigerian politicians.

Although Tinubu has not come out to declare his intention to run for Presidency come 2023, many of his supporters have already started to campaign for him.

Back to Top
Close
X
Buhari departs New York amid protests by Nigerians, Groups…Latest NewsSahara ReportersBuhari's visit to the US had been riddled with protests and counter-protests.President Muhammadu Buhari, on Saturday, departed New Yor…

X
IPOB orders sit-at-home for October 1, no Nigerian flag in South-East…Latest NewsBy Johnkennedy UzomaThe Indigenous People of Biafra (IPOB) has declared October 1 as another day of sit-at-home, advising the people of the South-East…