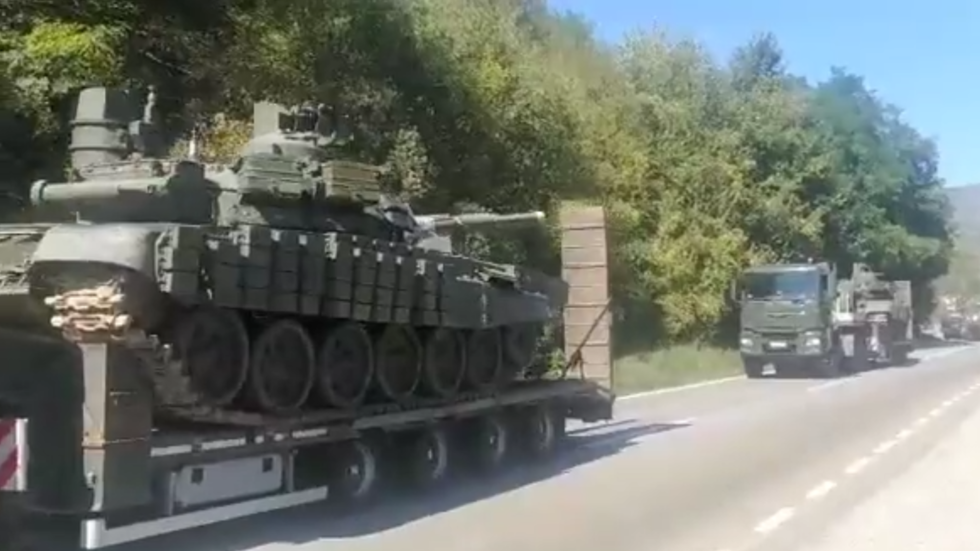 Serbia has been moving tanks and other military hardware towards the Kosovo border, videos circulating online suggest. Tensions between the country and the breakaway region soared after Kosovo banned Serbian license plates.

The show of force comes amid a new flare-up between Serbia and Kosovo, prompted by Pristina’s move to mandate that all vehicles with Serbian license plates must get Kosovo-issued temporary plates at border checkpoints before being allowed to cross into the region. The rule came into force on Monday, with motorists wishing to enter Kosovo from central Serbia now having to pay a €5 tax to receive temporary ‘Republic of Kosovo’ plates that are valid for 60 days.

Kosovo police have also been reportedly seizing Serbian license plates from drivers living in Serb-majority counties in the north of the region.

The ban prompted protests from ethnic Serbs, living in the north of the breakaway region. They have blocked two main roads in the area, leading to border crossings. The checkpoints remain blocked for a fifth consecutive day. Kosovo police said the roads have been cut off with “vehicles, heavy vehicles, gravel, etc., in different locations towards the border points Jarinje and Brnjak.”

Kosovo, predominantly populated by ethnic Albanians, broke away from Serbia following the NATO bombing campaign back in 1999. The region unilaterally declared independence in 2008. While Kosovo has been recognized by about half of the UN member states, including the US, it did not receive universal recognition. Among the countries that refused to recognize its sovereignty are Russia, China and India.

Back to Top
Close
X
Putin plays down ‘health rumors’……World NewsCold front! Kremlin issues photos of Putin during his hunting break with loyal defence minister in Siberia in bid to 'play down fresh rumours over his…