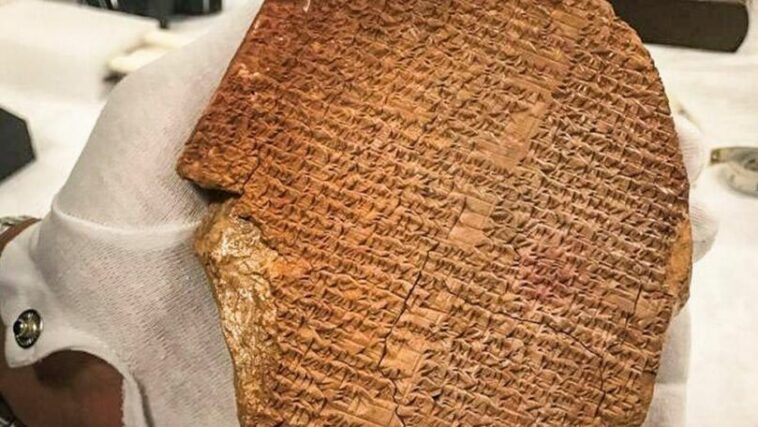 A 3,500-year-old tablet recounting the epic of Gilgamesh was returned to Iraq Thursday after being stolen three decades ago and illegally imported to the United States.

Iraqi Cultural Minister Hassan Nazim accepted the tablet during a ceremony in Washington.

“To me, it means restituting self-esteem and the confidence in Iraqi society,” he said.

Despite its small size, the ancient artifact has immense cultural and historical value. It contains portions of the “Epic of Gilgamesh,” considered one of the oldest works of literature in human history, which tells the story of a powerful Mesopotamian king on a quest for immortality.

“It’s a story which has influenced all the great monotheistic religions, leaving traces also on the Iliad and the Odyssey,” said UNESCO Director General Audrey Azoulay, who called the tale a “treasure” for “our common humanity.”

She added that the stone’s return to its rightful home is “a major victory for the international community over those who mutilate heritage.”

“Its repatriation itself is a tale of epic proportions,” said US Assistant Attorney General Kenneth Polite.

The clay tablet, carved with cuneiform characters, is believed to have been stolen from an Iraqi museum in 1991, around the time of the first Gulf War.

It reappeared in Britain in 2001, according to Polite.

An American art dealer bought it from a London-based Jordanian family in 2003, before sending the piece to the United States without declaring its true nature to customs. It was then sold to antique dealers in 2007 for $50,000 under a false certificate of origin.

The tablet was sold once again in 2014 for $1.67 million to the owners of craft chain Hobby Lobby, the Green family, fundamentalist Christians who wanted to display the stone at their Museum of the Bible in Washington….

X
UN and Afghanistan's Taliban, figuring out how to interact…World NewsAP NewsBy Aya BatrawyIt's been little more than a month since Kalashnikov-toting Taliban fighters in their signature heavy beards, hightop sneakers an…