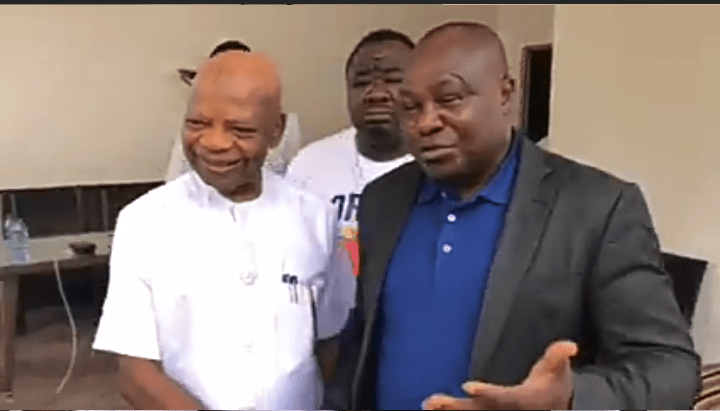 Oil mogul,  Prince Arthur Eze is alive, hale and hearty contrary to speculations about his health and rumoured death.

For some days running,  rumours of the death of the Anambra born philanthropist   has been flying in the air after a doctored photo where he was reportedly looking ‘ill’ went viral on social media.

Many wrote his name on their Facebook wall with question marks thereby triggering varied comment even as the rumour generated several reactions within Anambra state and beyond.

But a live video where Prince Eze  was seen in company of some men in his country home yesterday looking unruffled and healthy surfaced online to dispel the rumours.    In the video, those who came to visit him prayed for him, wished him many more years in good health even as he cheerfully dismissed his rumoured death,  entered his car and zoomed off  in a convoy for an outing .

Commenting on the development, President General of Ukpo town union, Chief Vincent Oyiliagu told Daily Sun that Prince Eze’s rumoured death emanated from the neighbouring community of Abba, whom he alleged  have refused to accept the reality of their defeat by Ukpo people after a legal tussle over land. Oyiliagu alleged Abba people invaded Ukpo land after the rumoured death chanting songs of triumph.

“They planned to take over our land. Someone from the community erroneously told them to pick up arms and take over our land since no one can fight back because Arthur Eze is dead.  Many of them believed such hoax and they really sang songs of triumph as they attacked us with weapons and even started felling trees in the land. We allowed them to exhaust their folly and even continued shooting for three days until some soldiers and police came and chased them away.

“I wondered why they had to act that way.  Though Arthur is alive and kicking, I’m still wondering how they thought that even his death could have given them back a land they lost in a case that went up to the Supreme Court.  All the same, they are wishing many more years of longevity to a man who  is…

Back to Top
Close
X
$600bn siphoned from Nigeria from 1960 to date — Prof. Bolaji Akinyemi…Latest NewsIndependent By Chris Ebong No less than $600 billion illic­it financial outflow had been recorded in Nigeria between 1960 and now. Prof. Bolaji Akinye…