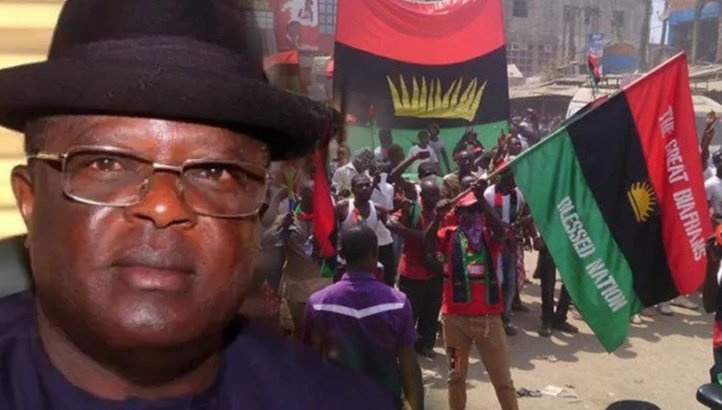 Ebonyi State Governor and Chairman of the South-East Governors’ Forum, Dave Umahi, says counter-secessionist groups may rise in the South-East geopolitical zone if the proscribed Indigenous People of Biafra does not call its members to order and stop the threats and killings.

Umahi, who also described the agitation for Biafra as “madness”, said South-East elite do not want secession but want the zone to be treated fairly and equitably as other zones in the country.

The governor also vowed that the South-East zone won’t be turned to a killing field and grounded by secessionist agitators.

He said youths in the region, who shunned dialogue to make their grievances heard and resolved but chose the path of agitation to cause criminality, would be “isolated as criminals”.

Umahi spoke on Wednesday as a guest on Channels Television’s ‘Sunrise Daily’ breakfast programme monitored by The PUNCH.

‘MASSOB not violent, IPOB dishes out messages of killings’

On Tuesday, the Senate Minority Leader, who represents Abia South in the red chamber, Enyinnaya Abaribe, had said that aside from IPOB and the Movement for the Actualisation of the Sovereign State of Biafra, there are more than 30 separatist organisations in the South-East.

But reacting on Wednesday on the television programme, Umahi said the two separatist groups he knows of are IPOB and MASSOB, adding that Abaribe spoke “from the point of his information”.

The governor stated that while MASSOB has never been violent, IPOB dishes out messages of fear and killings in the zone.

Umahi said, “The separatist groups, we know of IPOB, we know of MASSOB. MASSOB has never been violent and they are approachable and they tend to reason with us but this other people, IPOB, their command is never in the country and every one of them stays out and dishes out messages of bitterness and messages of threats and fear and killings and are not here with us to feel the pains.

“So, these are just the two groups that I can talk about but I fear that if IPOB does not call their people to order and stop these threats and killings and all that, other groups will rise up to counter it but there is no way South-East would be grounded, there is no way South-East will be sitting at home while other parts of the country will be doing businesses whereas we are the people that should be moving because we earn our living by moving.”

Furthermore, Umahi said the sit-at-home declared by IPOB to protest the detention of its leader, Nnamdi Kanu, who has been in the custody of the Department of State Services since June 2021, won’t be obeyed by Southeasterners if there is enough security presence in the zone…

Back to Top
Close
X
University of Benin lecturer rapes final year student, holds her captive…In the NewsNaija NewsA senior lecturer known as Dr. Bode Ekundayo of the Department of English and Literature, University of Benin has been arrested by school se…

X
Governors serve free food, Nigerians will rush to get COVID-19 vaccine: Expert…In the NewsPeoples Gazette"The assurance that a plate of food awaits them at the vaccination centres will cause a rush on the part of the eligible people to come…