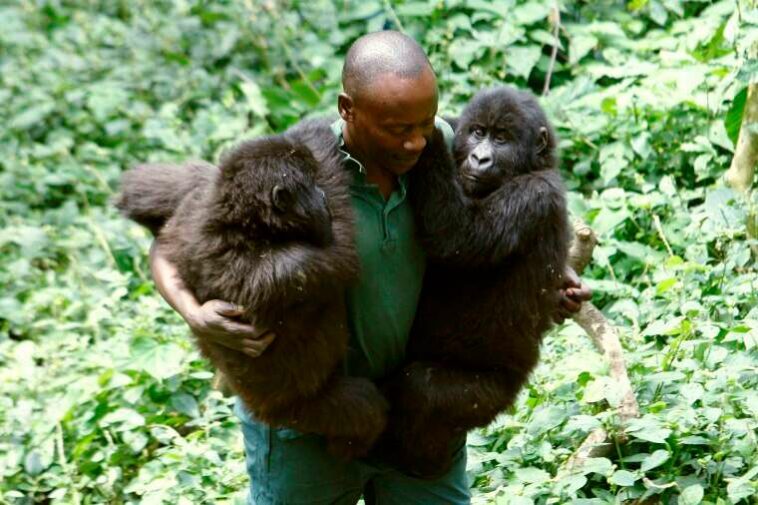 ‘It was a privilege to support and care for such a loving creature,” Ndakasi’s caretaker said.

Ndakazi “took her final breath in the loving arms of her caretaker and lifelong friend, Andre Bauma,” a statement from the Virunga National Park in the Democratic Republic of Congo said Tuesday.

She died last month after battling a prolonged illness at the park’s Senkwekwe Center where she had lived for more than a decade, the statement added.

Bauma had looked after Ndakasi ever since she was found clinging to her dead mother’s body by national park rangers and taken to the center which is known for taking care of orphaned mountain gorillas, the statement said.

Her mother had been shot by armed militia as part of a series of killings of gorilla families, it added.

It is with heartfelt sadness that Virunga announces the death of beloved orphaned mountain gorilla, Ndakasi.

“It was a privilege to support and care for such a loving creature, especially knowing the trauma Ndakasi suffered at a very young age,” Bauma said in a statement.

He added that Ndakasi’s “sweet nature and intelligence” had helped him “to understand the connection between humans and Great Apes and why we should do everything in our power to protect them.”

“I am proud to have called Ndakasi my friend,” he said. “I loved her like a child and her cheerful personality brought a smile to my face every time I interacted with her. She will be missed by all of us at Virunga but we are forever grateful for the richness Ndakasi brought to our lives during her time at Senkwekwe.”

Ndakazi made headlines in 2019 when she struck a pose with another orphaned mountain gorilla, Ndeze, as park ranger Mathieu Shamavu took a selfie.

It also told people not to be shocked by the gorillas’ poses. “It’s no surprise to see these girls on their two feet either — most primates are comfortable walking upright (bipedalism) for short bursts of time,” it said.

After Ndakasi died, the park’s statement…

Back to Top
Close
X
Horrifying mountain of human bones and bodies ‘ravaged by hyenas’ found inside ancient cave…Last PostThe Sun A MOUNTAIN of human bones and animal carcasses has been found in what's thought to be a hyenas' lava tube cave in Saudi Arabia. The gruesome f…

Ndakasi, mountain gorilla who became selfie star, dies in the arms of her caretaker