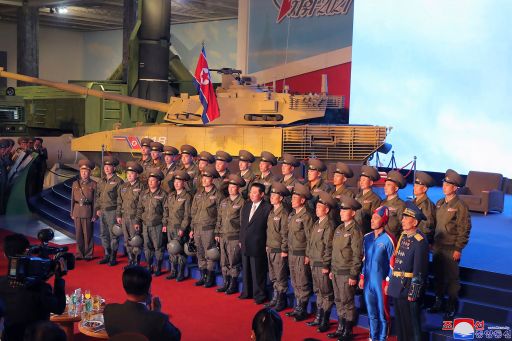 Kim Jong Un was upstaged in social media by a man in a skin-tight blue outfit who stood ramrod-straight with a pointy helmet amid an array of missiles — leading some to call him the real “rocket man.”

The blue-collar North Korean was among dozens of soldiers who posed for a photo with the Hermit Kingdom’s leader during an exhibition of weapons systems Monday.

His shiny outfit and red-blue-and-white helmet were in stark contrast to the olive drab uniforms worn by the rest of the soldiers. Only a high-ranking officer to his left also wore a blue uniform — albeit a standard-issue one.

Kim wore a Western-style suit for the occasion, during which he announced that he is building an “invincible” military that will have the capability to launch a nuclear strike at the US.

But most of the attention seemed to focus on the mystery man, who generated a lot of buzz on social media, where some users called him a “superhero,” a “captain DPRK,” or a “rocket man,” the moniker that President Donald Trump used for Kim…

Back to Top
Close
X
Taiwan is part of China, Russia declaresWorld NewsPeoples GazetteSergei Lavrov's comments mark the strongest indication yet that Russia under Vladimir Putin would likely back China's takeover of Taiwa…

X
Chinese army vows to ‘CRUSH’ Taiwan separatism & ‘external interference’ af…World NewsRTThe Chinese military has warned it will “resolutely crush” any attempt to split Taiwan from China, a day after it shared a video of “shock” troops c…