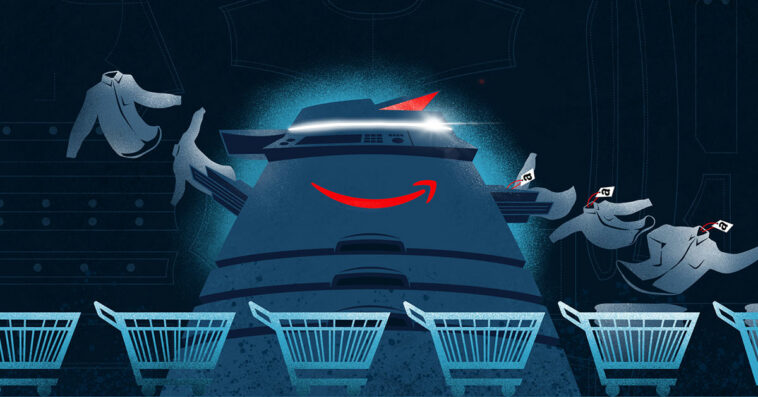 By ADITYA KALRA and STEVE STECKLOW

A trove of internal Amazon documents reveals how the e-commerce giant ran a systematic campaign of creating knockoff goods and manipulating search results to boost its own product lines in India – practices it has denied engaging in. And at least two top Amazon executives reviewed the strategy.

Amazon.com Inc has been repeatedly accused of knocking off products it sells on its website and of exploiting its vast trove of internal data to promote its own merchandise at the expense of other sellers. The company has denied the accusations.

But thousands of pages of internal Amazon documents examined by Reuters – including emails, strategy papers and business plans – show the company ran a systematic campaign of creating knockoffs and manipulating search results to boost its own product lines in India, one of the company’s largest growth markets.

The documents reveal how Amazon’s private-brands team in India secretly exploited internal data from Amazon.in to copy products sold by other companies, and then offered them on its platform. The employees also stoked sales of Amazon private-brand products by rigging Amazon’s search results so that the company’s products would appear, as one 2016 strategy report for India put it, “in the first 2 or three … search results” when customers were shopping on Amazon.in.

Among the victims of the strategy: a popular shirt brand in India, John Miller, which is owned by a company whose chief executive is Kishore Biyani, known as the country’s “retail king.” Amazon decided to “follow the measurements of” John Miller shirts down to the neck circumference and sleeve length, the document states.

The internal documents also show that Amazon employees studied proprietary data about other brands on Amazon.in, including detailed information about customer returns. The aim: to identify and target goods – described as “reference” or “benchmark” products – and “replicate” them. As part of that effort, the 2016 internal report laid out Amazon’s strategy for a brand the company originally created for the Indian market called “Solimo.” The Solimo strategy, it said, was simple: “use information from Amazon.in to develop products and then leverage the Amazon.in platform to market these products to our customers.”

The Solimo project in India has had international impact: Scores of Solimo-branded health and household products are now offered for sale on Amazon’s U.S. website, Amazon.com.

The 2016 document further shows that Amazon employees working on the company’s own products, known as private brands or private labels, planned to partner with the manufacturers of the products targeted for copying. That’s because they learned that these manufacturers employ “unique processes which impact the end quality of the product.”

This is the second in a series of stories based on internal Amazon documents that provide a rare, unvarnished look, in the company’s own words, into business practices that it has denied for years.

Amazon has been accused before by employees who worked on private-brand products of exploiting proprietary data from individual sellers to launch competing products and manipulating search results to increase sales of the company’s own goods.

In sworn testimony before the U.S. Congress in 2020, Amazon founder Jeff Bezos explained that the e-commerce giant prohibits its employees from using the data on individual sellers to help its private-label business. And, in 2019, another Amazon executive testified that the company does not use such data to create its own private-label products or alter its search results to favor them.

But the internal documents seen by Reuters show for the first time that, at least in India, manipulating search results to favor Amazon’s own products, as well as copying other sellers’ goods, were part of a formal, clandestine strategy at Amazon – and that high-level executives were told about it. The documents show that two executives reviewed the India strategy – senior vice presidents Diego Piacentini, who has since left the company, and Russell Grandinetti, who currently runs Amazon’s international consumer business.

In a written response to questions for this report, Amazon said: “As Reuters hasn’t shared the documents or their provenance with us, we are unable to confirm the veracity or otherwise of the information and claims as stated. We believe these claims are factually incorrect and unsubstantiated.” The company did not elaborate. The statement also did not address questions from Reuters about the evidence in the documents that Amazon employees copied other companies’ products for its own brands.

The company said the way it displays search results doesn’t favor private-brand products. “We display search results based on relevance to the customer’s search query, irrespective of whether such products have private brands offered by sellers or not,” Amazon said.

Amazon also said that it “strictly prohibits the use or sharing of non-public, seller-specific data for the benefit of any seller, including sellers of private brands,” and that it investigates reports of its employees violating that policy.

Piacentini and Grandinetti didn’t respond to requests for comment.

The unfiltered insight the documents offer into Amazon’s aggressive use of its market power could intensify the legal and regulatory pressure the company is facing in many countries.

Amazon is under investigation in the…

X
Brazil's Bolsonaro says he will not be vaccinated against Covid-19…World NewsCNNBy Rodrigo PedrosoBrazilian President Jair Bolsonaro said he decided not to get a Covid-19 vaccine, in an on-air interview with Jovem Pan radio on …