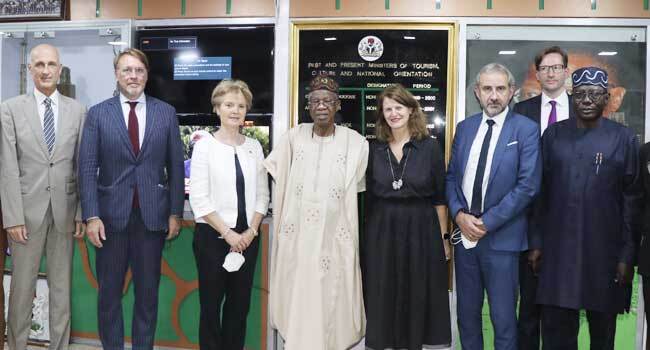 The Federal Government on Wednesday hailed the German Government for the repatriation of Benin artefacts from the European country.

About 1,130 pieces of Benin Bronzes are expected to be returned to Nigeria next year, with Germany expressing its readiness to willingly decide to return the items, thus becoming the first country to do so.

As part of moves to achieve this, the Minister of Information and Culture, Lai Mohammed, received the German government delegation that came to Nigeria for the signing of the Memorandum of Understanding.

According to a statement issued by Segun Adeyemi, the spokesman of the Minister, Mohammed said the MoU “marked the beginning of efforts that will culminate in the signing, in December 2021, of the agreement on the repatriation of the Benin Bronzes.”

This is even as he described the MoU signed between Nigeria and Germany in Abuja as a major step toward the repatriation of hundreds of Benin Bronzes from Germany next year.

“The German Government and the German people have taken a bold step by agreeing to voluntarily, without too much coercion on the part of Nigeria to return these artefacts. Because what the return of the artefacts will do is that it’s going to really cement further the relationship between Nigeria and Germany. Culture today has become one of the effective tools for soft diplomacy,” the Minister said.

X
Naira at record low days after Osinbajo's criticism of CBN forex policy…More NewsPremium TimesNaira fell significantly against the U.S. dollar at the official market on Wednesday as the currency exchanged hands with the greenback a…