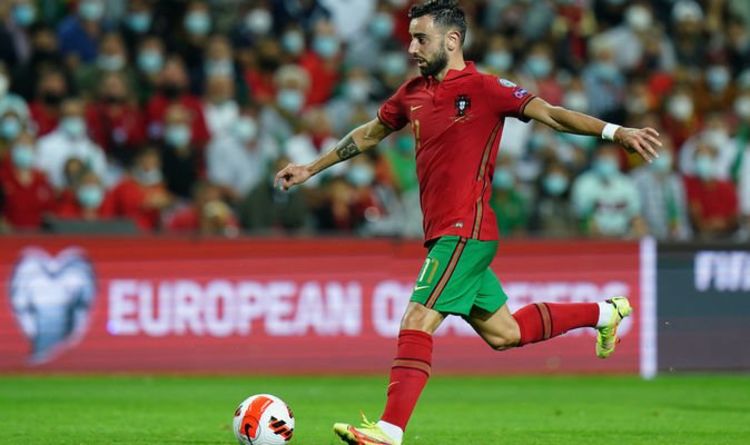 Manchester duo Paul Pogba and Bruno Fernandes have to been told to stop with the penalty theatrics and copy Cristiano Ronaldo by former Chelsea defender Franck Leboeuf. PSG’s Neymar and Kylian Mbappe also came under fire from Leboeuf for their penalty technique.

The players have introduced a modern style run-up to penalty taking which sees them run-up to the ball slowly in an attempt to try and trick the goalkeeper.

Ronaldo opts for a more traditional run-up which has seen him score countless penalties for club and country over the years, including two more on Tuesday against Luxembourg.

The Portuguese icon is known for sprinting to the ball and blasting at the goal.

And Leboeuf thinks players should take a leaf out of the Portuguese superstars book when it comes to stepping up from 12 yards.

“I scored a lot of penalties in my career and I never thought about playing with the goalkeeper,” Leboeuf told Ladbrokes.

“I don’t care about the goalkeeper, for me the only thought that I had was to put the ball in the net, not waiting for the goalkeeper to make his move.

“Before they were making moves much more than now because now they can’t move, back then they were moving forward like one or two yards to close the angle so it was even harder.

“I saw Ronaldo, scoring a penalty for Portugal, he doesn’t think about playing with the goalkeeper. Neymar is great but he misses some, and you shouldn’t play with the keeper…

Back to Top
Close
X
Timo Werner's upturn in form timely given Romelu Lukaku fitness concern…Premier LeagueFootball LondonThere was no time for Timo Werner to think as Thomas Muller's pass looped into his path. His finish had to be one based on instinct, on…

X
Analysis: Romelu Lukaku not a big game player…against the best teams he ha…Premier LeagueLukaku's return to Chelsea was widely celebrated, but whilst the striker has excelled at times already at Stamford Bridge, there are concerns reminisc…