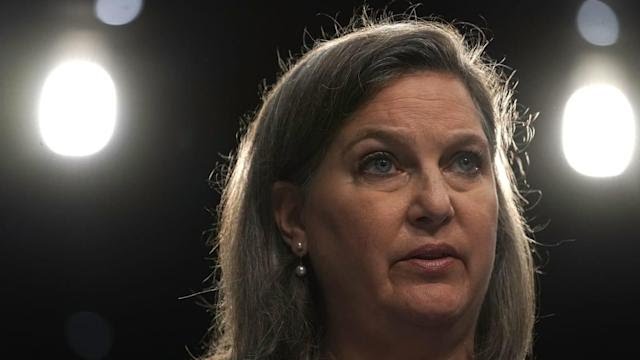 On Tuesday, talks between Undersecretary of State Victoria Nuland and Russia’s Deputy Foreign Minister Sergei Ryabkov ended with a dramatic threat to potentially shutter all Russian diplomatic missions if the U.S. didn’t lift all sanctions against Moscow. Nuland’s response? A resounding “Nyet,” much to Ryabkov dismay.

But Russia’s attitude towards Nuland goes beyond her politics: Apparently, Moscow’s misogynists would rather not deal with a woman at all.

Russian state media led the charge in covering Nuland as the subject of a “Fashion Police” segment, as opposed to a U.S. government official who should be taken with any modicum of seriousness. State media outlet Ria Novosti, typically known for its dry news coverage, led with a headline that read: “Nuland arrived at the Foreign Ministry in a crimson suit.” The piece mused about Nuland’s “colorful outfit” and her “unusual striped booties.”

Russia’s state TV followed suit, with the host of 60 Minutes Olga Skabeeva critiquing Nuland’s attire, which she described as something you would see in Boris Yeltsin’s Moscow of the 90s. Skabeeva claimed: “Nuland’s dress code let her down. The main U.S. expert in Russia and Ukraine, Victoria showed up to an official meeting at the Ministry of Foreign Affairs wearing booties and a crimson suit.”

Appearing on the state TV show The Evening With Vladimir Soloviev, political scientist and Professor of Communications Dmitry Evstafiev described Nuland—a U.S. government official—simply as an “exotic dame.” Experts in the studio likewise dismissed Nuland’s abilities as a negotiator and host Vladimir Soloviev surmised: “There is no one in America for us to talk to.”

Soloviev didn’t always feel that way. During the same broadcast of his show on Tuesday, the notorious pro-Kremlin propagandist admitted that he personally authored multiple letters to former President Donald J. Trump during his tumultuous term, urging him to appear on the program—to no avail. But Moscow’s prominent talking heads are holding on to hope that Trump will potentially run and win in 2024.

“ We observe too much hysteria, too much emotion.”

In an ongoing effort to appeal to American conservatives, savvy promoters of Putin’s reign lean heavily on social media outlets, including YouTube. Editor-in-chief of RT Margarita Simonyan recently described such platforms as “weapons,” more effective than any others. Certain segments of Russian state TV shows are often translated and posted to YouTube, including one recent broadcast that laid the blame for Russia’s troubles with the West not on Moscow’s own destructive foreign policy decisions, but instead on American women…

X
'There have to be consequences:' Judge ups sentences for Capitol rioters…United StatesReutersBy Jan Wolfe and Mark HosenballA federal judge in Washington has repeatedly sentenced people who stormed the U.S. Capitol to more prison time t…